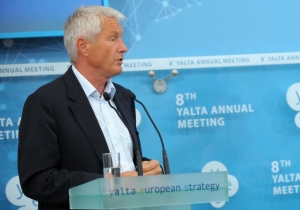 We should widen understanding of what Europe is – Jagland

Commitment to freedom and human rights is one of the key forces in modern society, Secretary General of the Council of Europe Thornbjorn Jagland said in the course of discussing human right and...

Prime Minister of Ukraine, Mykola Azarov, believes that the agreements with the EU to be signed soon should include prospects for Ukraine’s membership in the European Union. The leader of Ukrainian government declared so during the discussion “Eastern Europe and the Role of Ukraine” at 8th Yalta Meeting of YES.

Clear prospects for membership in the European Union is necessary for Ukraine and Moldova, Prime Minister of Moldova Vladimir Filat stated in the discussion “Eastern Europe and the Role of Ukraine” at 8th Yalta Meeting of YES.

The European Union is close to entering into an association agreement and a free trade agreement with Ukraine, Radoslaw Sikorski, Minister of Foreign Affairs of Poland, the country holding presidency of the Council of the European Union (July – December 2011), declared during the discussion “Eastern Europe and the Role of Ukraine” at the 8th Yalta Annual Meeting of YES.

The first day of the 8th Annual Meeting of Yalta European Strategy has come to an end. Later at night today the Annual Meeting participants will have a chance to hear the world’s preeminent economist and publicist, winner of the Nobel Prize in Economics 2008 Paul R. Krugman and his special speech entitled “The Future of Western Democracy and Market Economy”.

For the latest one hundred years, the Arab countries have experienced the range of crushing defeats in nation-building domain. Tarek Osman, a writer and analyst, author of “Egypt on the Brink”, expressed this idea during the discussion about the Arab revolutions at the 8th Annual Meeting of Yalta European Strategy.

Leonid Kuchma: In the time of the Orange Revolution, Ukrainians proved they were Europeans

During the Orange Revolution Ukrainians proved their belonging to the European civilization. This idea voiced out Leonid Kuchma, President of Ukraine (1994-2005), in the debates on the issue of the Northern Africa revolutions at the 8th Annual Meeting of Yalta European Strategy.

Russia must “come back to Europe” – Yurgens

Russia in the globalized world should play the role of a bridge between the West and East Asian civilizations.

The world must revise its approach to global governance – Talbott

Process management at the global level is more and more demanded in the modern conditions. However, conventional associations and institutions do not answer the present-day needs any longer. This idea was voiced out in the debates “World Architecture – Continuous? – Reshaping” at the 8th Yalta Annual Meeting of YES by Strobe Talbott, President of the Brookings Institution (USA).

All integration associations in the world these days are subject to a severe trial and joining any association, a country is to assess thoroughly and soberly whether it is ready to integrate.