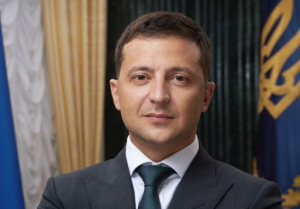 Volodymyr Zelenskyy was elected President of Ukraine on April 21, 2019

2000 - Graduated from Kyiv National Economic University, with a law degree

From the outset of the hostilities in Donbas Volodymyr Zelenskyy and “KVARTAL 95” rendered support to the Armed Forces with funds, equipment and arranged shows on the front line and in different military units.