15th YES Annual Meeting: “The Next Generation of Everything”

The 15th Annual Meeting of Yalta European Strategy (YES) – “The Next Generation of Everything” – will be held on September 13-15, 2018 in Kyiv. Over 600 leading politicians, diplomats, businessmen, civil activists and experts from 28 countries will take part in the conference organized by the international forum YES in partnership with the Victor Pinchuk Foundation.

The discussions will focus on the future – on the groundbreaking changes that will have a profound impact on all aspects of life like never before. Which innovations will disrupt society, economy and politics? What major global challenges are ahead? What is the future of the United States, the EU, NATO, the Russian Federation? How to protect democracy against manipulation by outside powers and resist disinformation?

An important focus will be the implications of disruptive innovation for Ukraine; and on the other hand the specific challenges Ukraine is facing in its transformation process and with the upcoming presidential and parliamentary elections.

Speakers of the forum include world-leading decision-makers, futurologists, historians, politicians, investors, security and media experts. Both speakers and participants of the Annual Meeting will seek answers in a variety of discussion formats.

Victor Pinchuk, founder and member of the Board of Yalta European Strategy: “The future is not kind with those who do not think about the future. Therefore, at our conference this year, our focus will be the future. To analyze the next generation of everything, as an opportunity and as a threat.”

Alexander Kwasniewski, chairman of the Yalta European Strategy Board, President of Poland (1995-2005): “Kyiv is a great place to discuss the future. Ukraine is at the forefront of many challenges facing Europe, and with its openness to the globalized world and commitment to European values can become a pioneer for Europe. Our commitment to the next generation of Ukrainians is to help them get ready for a successful European future in a changing world. This mission is at the core of YES values.”

The event will be held at Mystetskiy Arsenal.

Since 2008, Yalta European Strategy (YES), in cooperation with the Victor Pinchuk Foundation, has provided Ukrainian young leaders with access to its Annual Meeting. Each year, YES selects 100 Ukrainian students and young professionals, including alumni of the Foundation’s scholarship programmes Zavtra.UA and WorldWideStudies, to participate in the Young Leaders Section.

The Young Leaders Section is a discussion platform for young people to share ideas, learn from international and local professionals’ experience and develop practical solutions to meet modern challenges. The core criteria to select the young leaders are civic engagement, leadership potential and motivation to improve the country. Over 600 of the best Ukrainian students and young leaders have participated in the Young Leaders Section since its launch.

The young generation of Ukrainians as those who will transform the country has been at the core of Victor Pinchuk Foundation's work since its inception in 2006. By creating a young leaders section at YES, the foundation provides this generation of change-makers with the opportunity to learn from world leaders in politics, business and the nonprofit sector.

Since 2015, the Yalta European Strategy, in partnership with the Ukrainian School of Political Studies, has held Ukrainian Regional Civil Servants Sections for 100 Ukrainian civil servants and politicians from the regions as a part of the YES Annual Meetings.

Politicians and civil servants from the regions play a crucial role in the implementing reforms in Ukraine. The Ukrainian Government places strategic priorities on decentralization, which is aimed at strengthening regional and local administrations and communities. Highly motivated young activists and public officials across Ukraine have stepped forward to help reforms to succeed. Ukrainian Regional Civil Servants Section at the YES Annual Meetings helps young regional leaders expand their ambitions and energy to transform Ukraine. It provides the carefully selected participants with international know-how and best practices, strategic and leadership insights. It enables them to build a strong network of like-minded change-makers, nationally and internationally.

A nightcap is a drink or two to help you relax and sleep better at the end of the day.

Yalta European Strategy (YES) has introduced nightcap events for the participants of the 15th YES Annual Meeting to wind down at the end of the first conference day and discuss interesting topics in an informal atmosphere. YES has invited leading politicians, opinion makers and business leaders to present their views on modern trends that define the world and Ukraine. The nightcaps are organized in partnership with the U.S. Embassy in Ukraine and America House, International Renaissance Foundation, Ukrainian-Jewish Encounter and the Atlantic Council, Mejlis of the Crimean Tatar people and Ministry of Information Policy of Ukraine, Western NIS Enterprise Fund.

The YES nightcaps are free of charge and casual. To join one, please register via the link below on this page. Nightcap time will be disclosed to registered participants.

Should you have any questions, feel free to contact the YES nightcaps team at [email protected].

Democrats need to find a new model for communicating their ideas, Alexander Kwasniewski 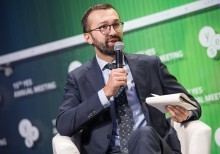 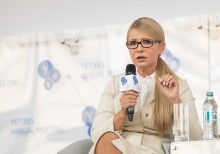