A unique way of presenting artworks highlights the 17-year long tradition of YES to bring art at the heart of political discussion. The active support of some of best artists globally equally shows the shared belief that art is a changemaker provoking and influencing discussion.

For his large-scale painting Beautiful Zeus Maia Freya, Damien Hirst is using his method of spin painting. The background of the work emerges from whirling colored paints with the four skulls being dawned over these nearly spontaneous painterly actions. The spinning reminds the Rota Fortunae or the Wheel of Fortune, referring to the capricious nature of the fate and the unforeseen forces of nature. The work functions as a monumental memento mori, emphasizing man’s mortality and fragility in today’s world. 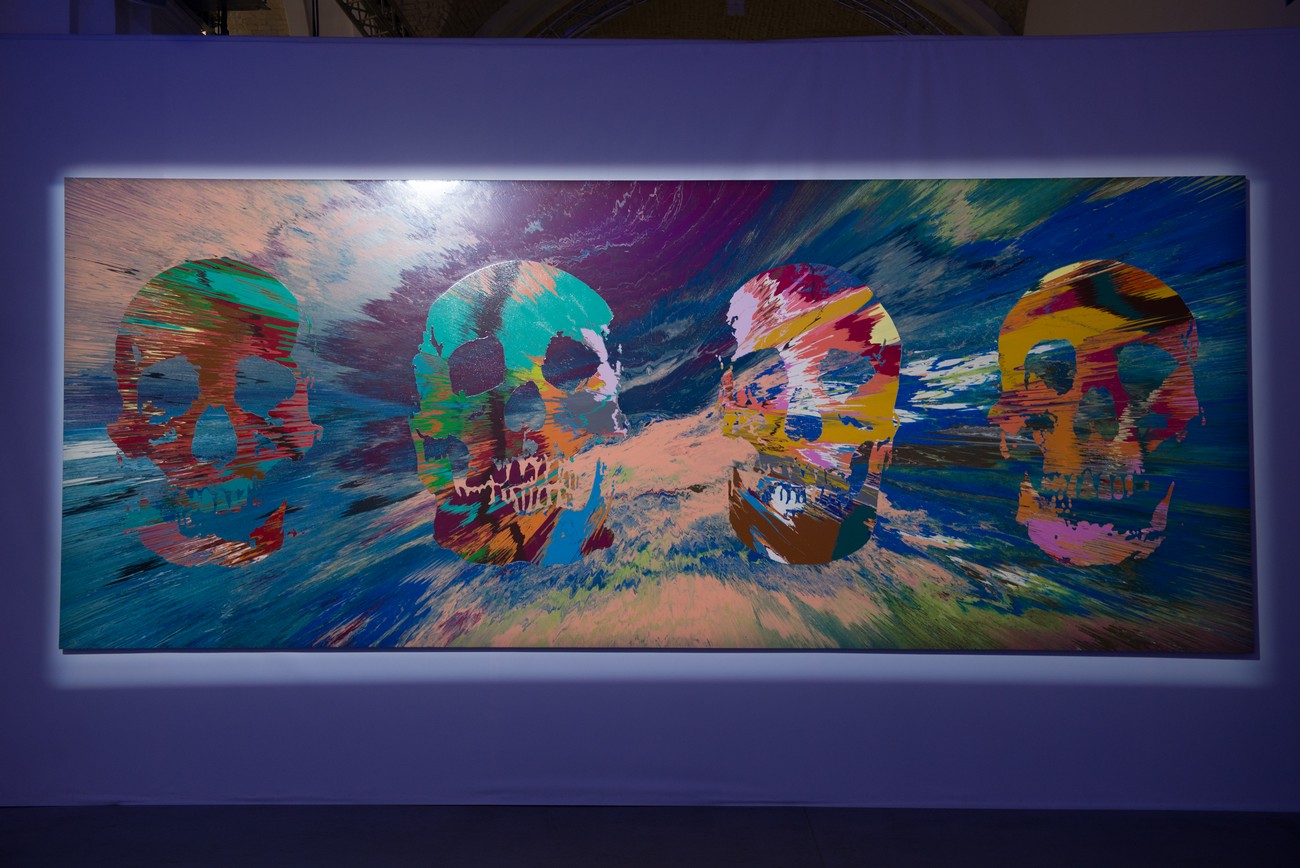 The sculpture Waiting for Godot by Marc Quinn is a human-height skeleton in a prayer’s kneeling posture. The figure is a symbol of memento mori in face of global changes where the body becomes hackable and life on earth needs to be seen with a perspective on natural disasters, climate change, and a possible mass extinction event. The title is quoting Samuel Beckett’s classic play for the theater performance “Waiting for Godot”, an allegory of the often blind and irreflective human faith in miracles, emphases inaction as the evil that leads to many of the risks we face today. 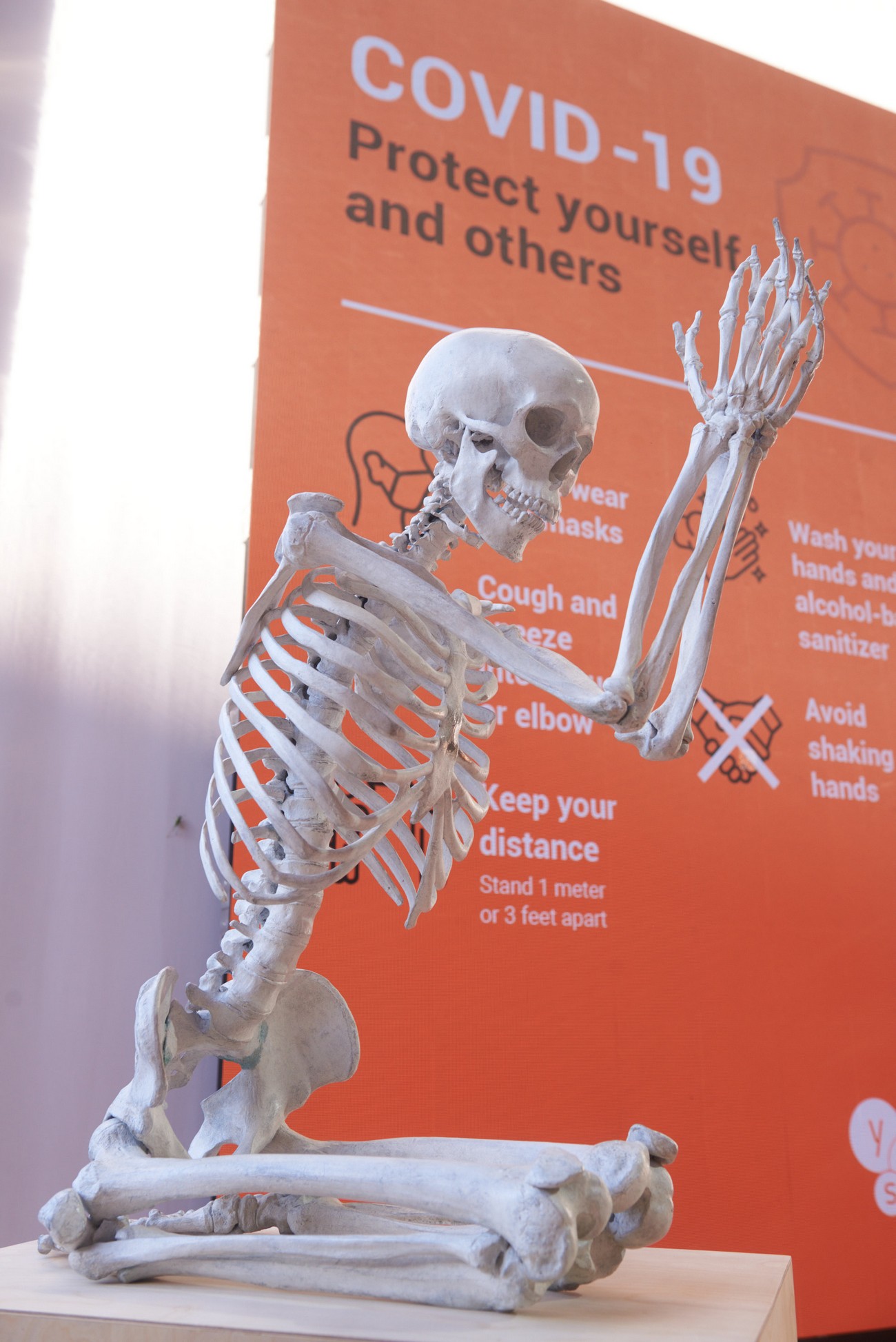 Appealing to the history of his native country of Afghanistan, Aziz Hazara makes a monument to the dramatic and violent struggle that generations of people in Afghanistan have experienced in the never-ending war. In the multichannel video installation Bow Echo five children resist the wind, climbing on a large rock while attempting to blow a bright plastic bugle. Their near futile act of resistance represents a story of repression and suffering while emphasizing the fragility and insecurity of entire communities against the background of the mountain landscape of Kabul, the site of their traumatic experience. The sound blurs together with the noise of the wind and approaching drones.

In the series South coast of Crimea Oleg Tistol explores the topic of national stereotypes. Depicting palm trees on the Yalta embankment, he considers this common symbol of paradise as a national tree of Ukraine. Ukrainian palm primarily refers to the Crimea, which was once associated with the beauty of the landscapes, a sense of serenity, and endless vacation. From today’s perspective, these idyllic series become a sensitive reminder of a loss but they also carry within hope to return to those occupied territories and bring them back to Ukraine. 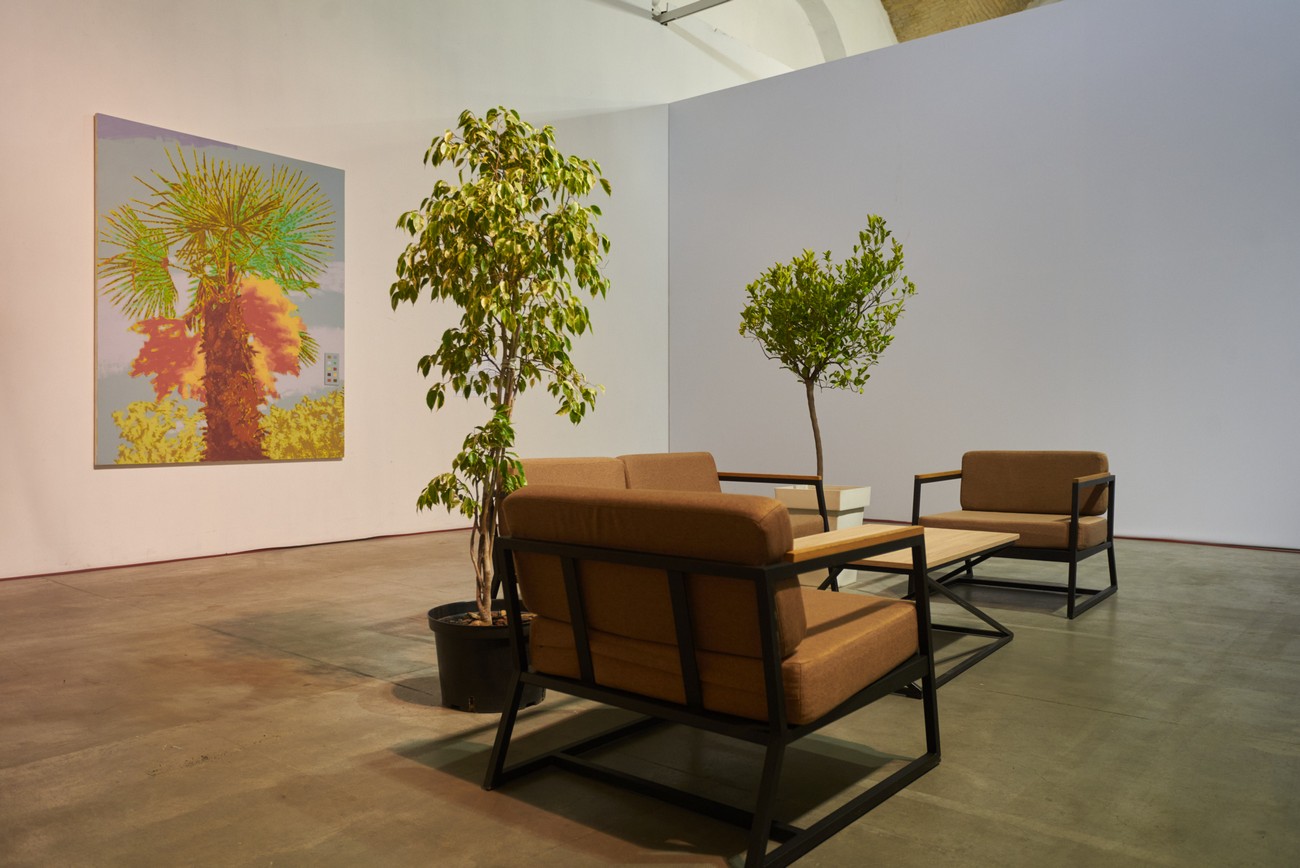 The installation History of Pain presents an inflatable ball, which soars over the platform filled with sharp knives. The slightest intrusion or interruption in the air supply, will lead to instant and irrecoverable damage. Through a visually clear and minimalistic image, Damien Hirst's iconic work shows the world's extreme vulnerability, the sharp line between life and death, and the tension between fear and belief. The unbearable proximity and inevitability of demise becomes a constant reminder of the transience of life and its exceptional fragility. 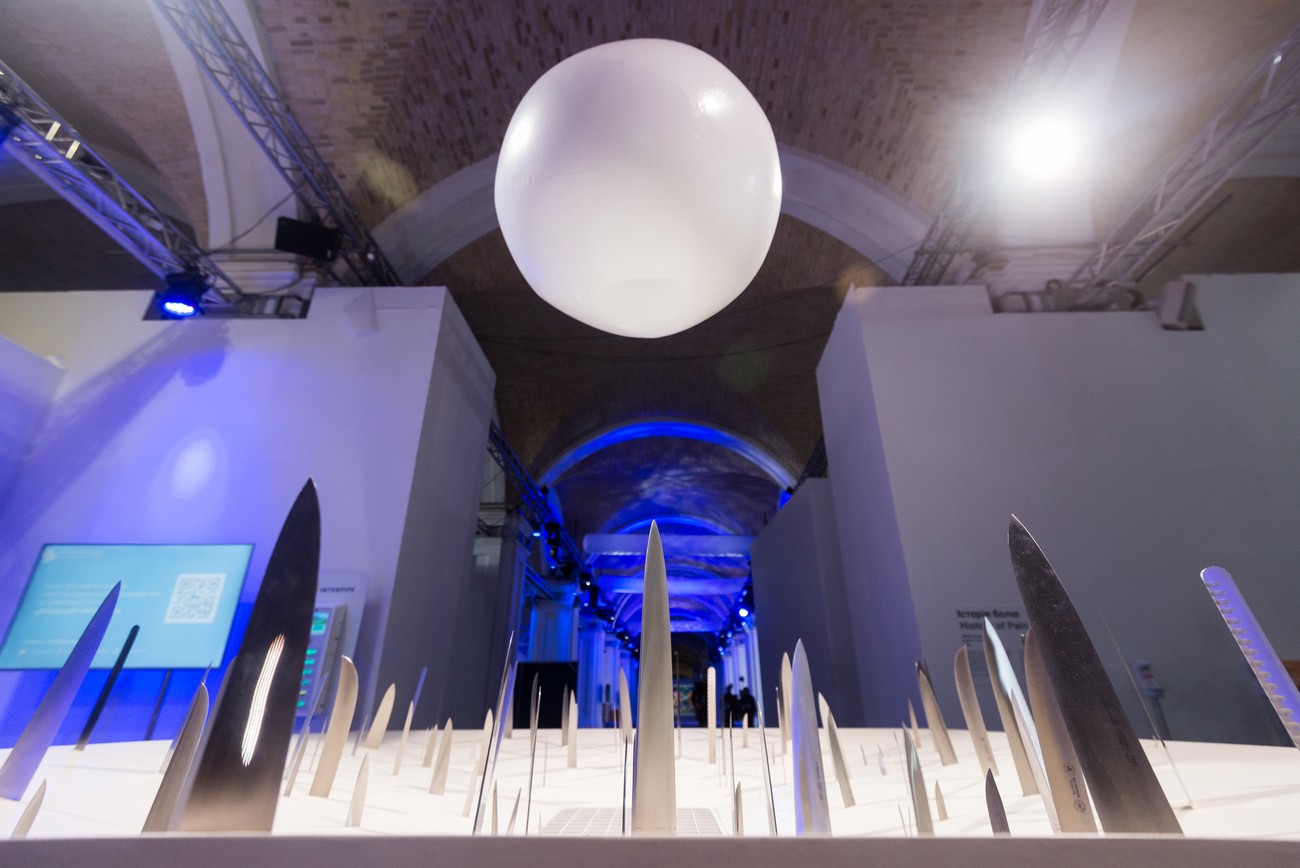 I Was Always Good at Finding Things, 2008

Harland Miller’s installation I Was Always Good at Finding Things involves seven figures frozen in various positions behind the blue and white tape cordoning off an area as a place of a mysterious incident. The inscription on the tape reads “The Tell-Tale Heart” appealing to a title of a short story written by Edgar Allan Poe where a perfect crime moves toward a complete disaster. Exhibited in the global pandemic times, the mannequins fully equipped in protection gears with respirators and gloves become a chilling image striking unrest into everyone’s mind. It no longer represents exclusively medical workers or forensic scientists but creates fear that a worse disaster might just happened. At the same time, this group of figures might suggest a dystopian future where ordinary citizens need protect themselves from pandemic or environmental disasters. 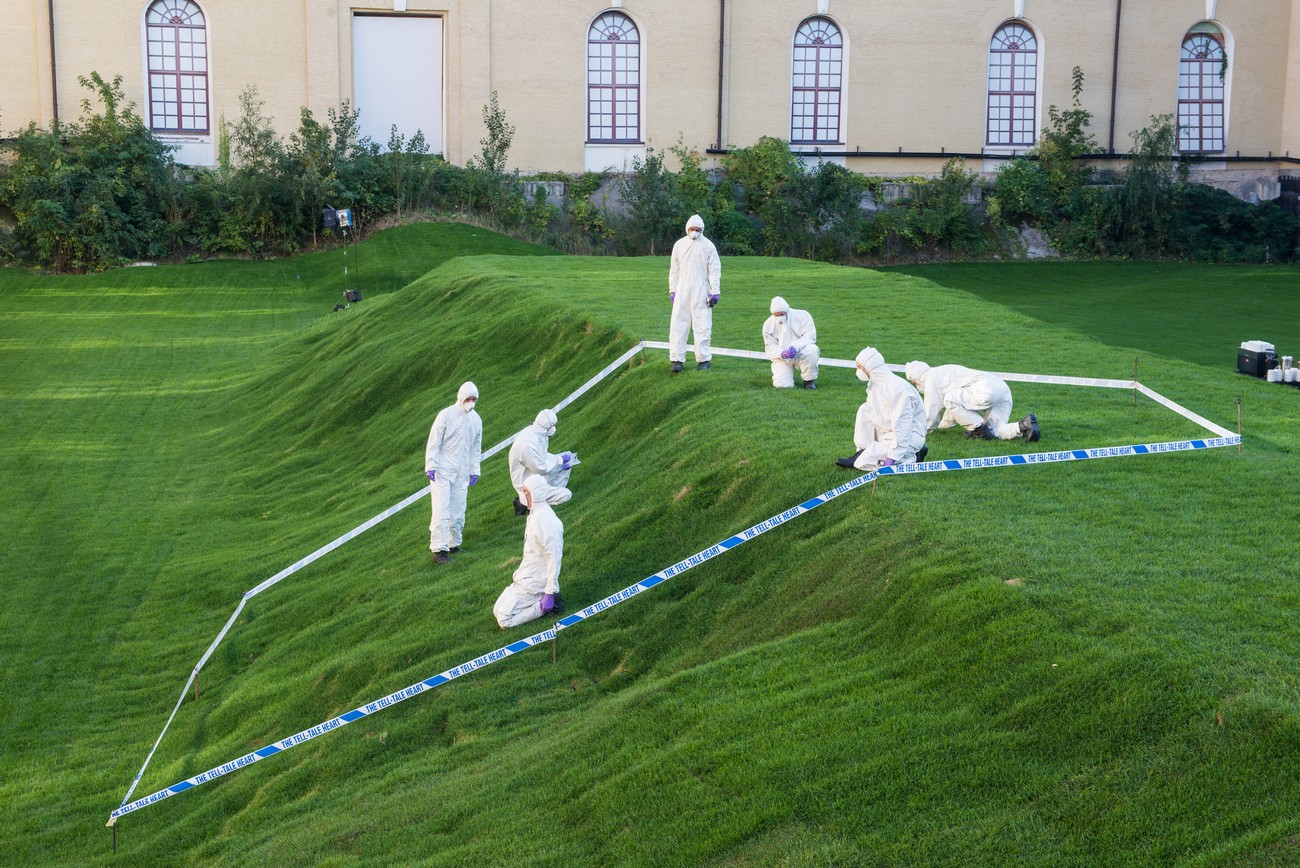