The 13th Annual Meeting of the Yalta European Strategy (YES) “The World, Europe and Ukraine: storms of changes”, organized by the international civil platform YES, in partnership with the Victor Pinchuk Foundation, will be held in Kyiv on September 15-17. The plenary sessions and special sections of the forum will take place at the Mystetsky Arsenal museum and cultural centre.

More than 350 prominent politicians, diplomats, businessmen, civil activists and experts from 20 countries of the world will take part in the work of the forum.

The participants of the YES Annual Meeting will be discussing topical geopolitical, economic and social processes that are underlying the drastic changes and the many challenges Europe and the world are facing and are impacting on their future.

Commenting on the goals of the 13th YES Annual Meeting, the founder and member of the Board of the Yalta European Strategy, Victor Pinchuk said, “The annexation and the war in the heart of Europe have broken the basic international rules. Ukraine has found itself in the centre of a “global storm”, but if its initial causes are not removed, it will sooner or later reach everyone. I hope that our western partners realize why our country should remain their priority: without solving the Ukrainian issue, European issues will not be solved.”

The chairman of the YES Board, President of Poland (1995-2005) Alexander Kwasniewski, stressed, “Today, Ukraine’s future may be discussed only in the global context. And it is not possible any more to talk about the future of the modern world without a debate on Ukraine. World is changing. We redefine rules and goals that will determine the world in the 21st century. Ukraine is a test for us all, a test of our commitment to the fundamental values such as freedom of nations, the right of states to sovereignty, peaceful coexistence. This philosophy was initially in the foundation of the Yalta European Strategy. YES has been keeping committed to this approach for 12 years of its action. It is this view that enables us to reach productive results in our discussions. This is not just about dreaming and talking, this is about the search for real solutions”.

The key topics of the 13th Annual Meeting include possible implications of the forthcoming presidential election in the USA; issues that the united Europe is facing following the Brexit, refugee crisis and growth of populism in the politics; global threats of terrorism and radicalism, and the issue of social inequality and the ways to overcome it on the global scale.

The situation in Ukraine will occupy a particular place in the discussions: the participants will address the state of the reform process and transformations in the country, and what stands in their way, the issues of supporting the democratic development of Ukraine from the part of the West and the prospects for further development of the country. A special discussion will be focused on the relations between Russia and the West under the geopolitical circumstances that have changed.

The YES Annual Meetings have become an open platform to discuss and look for new ideas and views on paths to European, Ukrainian and global development. These meetings bring together over 350 politicians, diplomats, statesmen, journalists, analysts and business leaders from more than 20 countries. The dialogue on global challenges broadens the vision on the situation inside Ukraine and the prospects for the country’s development in the modern world and puts Ukraine on the international map.

The Victor Pinchuk Foundation is an international, private, non-partisan, philanthropic foundation based in Ukraine. The Foundation was established in 2006 by businessman and public figure Victor Pinchuk. It’s goal is to empower future generations to become the change makers of tomorrow. To achieve this goal, a variety of projects are deeloped, partnerships in Ukraine and worldwide are build. There are three main areas the Foundation invests:

The projects of the foundation include the largest private scholarship program in Ukraine Zavtra.UA, the international scholarship program for Ukrainian students WorldWideStudies, public lectures with international leaders for Ukrainian students and the creation of the Kyiv School of Economics; a network of modern neonatal centres Cradles of Hope throughout Ukraine; the largest and most dynamic contemporary art centre in Central and Eastern Europe PinchukArtCentre – free of admission and with over 2.2 million visitors as of today – with the biannual global prize Future Generation Art Prize for artists up to the age of 35 and biannual PinchukArtCentre Prize for young Ukrainian artists; the Davos Philanthropic Roundtable and the Davos Ukrainian Lunch organized annually at the occasion of the World Economic Forum's Annual Meeting in Davos. The Victor Pinchuk Foundationis a member of the European Foundations and Ukrainian Grantmakers Forum,  supports the Clinton Global Initiative, Brookings Institute, the Peres Center for Peace, the Tony Blair Faith Foundation and other non-governmental organizations.

The 13th Yalta European Strategy Annual Meeting will be streamed live at yes-ukraine.org as well as web-sites of the Media Partners in English and Ukrainian.

The official Twitter of the 13th YES Annual Meeting is @yes_ukraine, and participants and followers can include the hash tag: #YESUkraine2016

American Lunch | US ELECTIONS: Wild Campaign - or system crisis? And what it means for us

SUMMING UP: MAJOR RISKS FOR THE WORLD, EUROPE, AND UKRAINE 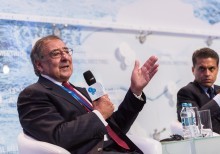 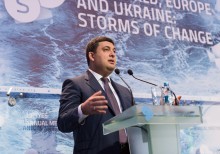