More than 200 leaders from politics, business and society representing more than 20 countries discussed major global challenges and their impact on Europe and Ukraine.

Current state and future perspective for the global economy was one of the key topics at the 8th Yalta Annual Meeting. The world’s preeminent economist and publicist, winner of the Nobel Prize in Economics 2008 Paul Krugman delivered his special speech entitled “The Future of Western Democracy and Market Economy” in the evening of the first day of the Forum. Global economic crisis also was discussed during the session “The Global Economy – What Went Wrong and How to Right It?” that featured Lawrence Summers, Jurgen Fitschen, Iryna Akimova, Suresh P. Prabhu. Economic potential and prospects for development of Turkey and Ukraine were debated at a separate session which was joined by Egemen Bagis, Carl Bildt, Petro Poroshenko, and Anders Aslund.

Another important topic for discussion was problems and prospects for Eastern Europe development and relationships of the Eastern European countries with their largest neighbours – European Union and Russia. The debate which opened the second plenary day of the Forum was joined by Mykola Azarov, Vladimir Filat, Stefan Fule, Radoslaw Sikorski. Human rights and democracy development in the "Wider Europe" were discussed by Thorbjorn Jagland, Mevlut Çavusoglu, Kostyantyn Gryschenko, and Mario David. The first plenary day, among other events, also featured a debate on “Wider Europe in a Globalized World: Visions of Integration” with Andriy Klyuyev, Carl Bildt and Kairat Kelimbetov as panellists.

The discussion “Key Trends That Will Shape Tomorrow’s World” was on the agenda of the second Forum day, September 17, and was devoted to the problems of three most important areas in today’s world – spiritual, economic and informational. The discussion panellists belong to the category of the world’s leading experts in these areas - Anthony Charles Lynton (Tony) Blair, Niall Ferguson, Yuri Milner.

Shimon Peres: Speech at the 8th Annual Meeting of YES

Global changes mean not only challenges but opportunities too – Kwasniewski 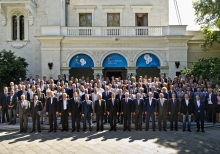 Second day of the 8th Yalta Annual Meeting of YES 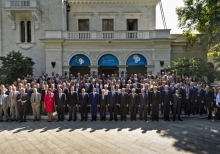 First day of the 8th Yalta Annual Meeting of YES