6th Yalta Annual Meeting: “Ukraine and the World after the Crisis”

About 200 decision-makers from Ukraine, the EU, Russia, the US, China and beyond discussed the future of Ukraine’s and the world’s economy and the key political trends. In a live TV link with Jerusalem, President Shimon Peres shared his vision of building a successful state. Insights into the global economic and financial crisis and its aftermath were offered in TV links with George Soros, Dominique Strauss-Kahn and Alan Greenspan. Yulia Tymoshenko, Viktor Yanukovych and Arseniy Yatseniuk presented their visions of the future of Ukraine after the 2010 presidential election. Aleksander Kwasniewski, James Wolfensohn, Philippe Le Houerou, Ceyla Pazarbasioglu and Joschka Fischer addressed global economic issues, prospects for Ukraine’s economic recovery and the EU-Ukraine- Russia relations.

The Chinese perspectives on the world after the crisis were presented by China’s former Permanent Representative to the UN Ambassador Wu Jianmin and a leading entrepreneur from Hong Kong Ronnie Chan.

Ukrainian-Russian relations must develop on an equal basis — YES participants

Dominique Strauss-Kahn: It is too early to celebrate victory over crisis 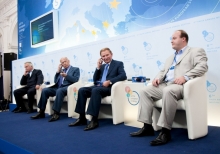