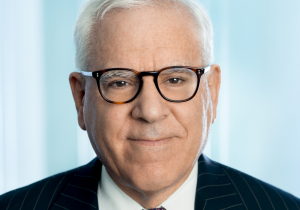 Co-Founder and Co-Chairman, The Carlyle Group

David M. Rubenstein is Co-Founder and Co-Chairman of The Carlyle Group, one of the world’s largest and most successful private investment firms. Established in 1987, Carlyle now manages $276 billion from 27 offices around the world.

Mr. Rubenstein is Chairman of the Boards of the John F. Kennedy Center for the Performing Arts, the Council on Foreign Relations, and the Economic Club of Washington; a Fellow of the Harvard Corporation; a Trustee of the National Gallery of Art, the University of Chicago, Memorial Sloan-Kettering Cancer Center, Johns Hopkins Medicine, the Institute for Advanced Study, the National Constitution Center, the Brookings Institution, and the World Economic Forum; and a Director of the Lincoln Center for the Performing Arts and the American Academy of Arts and Sciences, among other board seats.

Mr. Rubenstein is a leader in the area of Patriotic Philanthropy, having made transformative gifts for the restoration or repair of the Washington Monument, Lincoln Memorial, Jefferson Memorial, Monticello, Montpelier, Mount Vernon, Arlington House, Iwo Jima Memorial, the Kennedy Center, the Smithsonian, the National Archives, the National Zoo, the Library of Congress, and the National Museum of African American History and Culture. Mr. Rubenstein has also provided to the U.S. government long-term loans of his rare copies of the Magna Carta, the Declaration of Independence, the U.S. Constitution, the Bill of Rights, the Emancipation Proclamation, the 13th Amendment, the first map of the U.S. (Abel Buell map), and the first book printed in the U.S. (Bay Psalm Book).