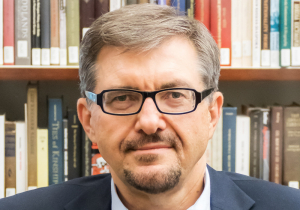 Serhii Plokhii is the Mykhailo Hrushevsky Professor of Ukrainian History and the director of the Ukrainian Research Institute at Harvard University. He began his academic career at the University of Dnipropetrovsk in Ukraine, where he was promoted to the rank of full professor and held a number of administrative positions. He later taught and conducted research at the University of Alberta in Canada, where he served as the associate director of the Peter Jacyk Center for Ukrainian Historical Research and founded the Research Program on Religion and Culture at the Canadian Institute of Ukrainian Studies. In 2007, Plokhii was named the Mykhailo Hrushevsky professor of Ukrainian history at Harvard. Since 2013, he has served as the director of the Harvard Ukrainian Research Institute, where he leads a group of scholars working on MAPA: The Digital Atlas of Ukraine, an online, GIS-based project.

Plokhii’s research interests include the intellectual, cultural, and international history of Eastern Europe, with an emphasis on Ukraine. A leading authority on the region, he has published extensively in English, Ukrainian and Russian. His books deal with history of religion, origins of national identities, history of the Soviet Union and the Soviet-American rivalry in the Cold War, and won numerous awards, including the Lionel Gelber Prize for the best English-language book on the international relations for The Last Empire: The Final Days of the Soviet Union (2014), Taras Shevchenko National Prize (Ukraine) for The Gates of Europe: A History of Ukraine (2015), and Ballie Gifford Prize and Pushkin House Book Prize, UK for Chernobyl: History of a Tragedy, (2018). His latest book, Nuclear Folly: A History of the Cuban Missile Crisis was released in April 2021.