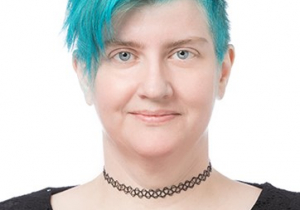 Cathy O’Neil is a data skeptic who uncovers the dark secrets of big data. She is the author of the New York Times bestselling Weapons of Math Destruction: How Big Data Increases Inequality and Threatens Democracy, which was also a semifinalist for the National Book Award. She is a columnist for Bloomberg Opinion and founded the company ORCAA, an algorithmic auditing company. O'Neil was tapped to appear as a professional in her field in The Social Dilemma, a critically-acclaimed film that explores the dangers of social networking. She helps companies understand and mitigate their risks around the algorithms they employ and that are used against them.

Starting as a professor at Barnard College, where she published a number of research papers in arithmetic algebraic geometry, Cathy later switched over to the private sector. She worked as a quantitative analyst for the hedge fund, D.E. Shaw, in the middle of the credit crisis, and then for RiskMetrics, a risk software company that assesses risk for the holdings of hedge funds and banks. She then left finance and started working as a data scientist in the New York start-up scene, building models that predicted people’s purchases and clicks.