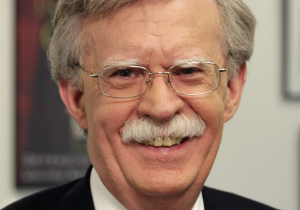 John Bolton Described as "someone who sees the world as it really is" and who speaks "with moral clarity," former White House National Security Advisor John Bolton provides us with an unparalleled perspective on world events.

One of America’s most prominent policy voices, John Bolton is a lawyer and diplomat who has spent his career fighting to protect American national interests. As National Security Advisor, Ambassador Bolton championed a strong and resolute US foreign and defense policy – recognized for his powerful national-security influence and past administrative experience, having served in the Reagan administration and under former presidents George H.W. Bush and George W. Bush.

Ambassador Bolton scored key policy victories during his recent White House tenure, such as overseeing the administration's withdrawal from the 2015 international nuclear deal with Iran, reached under former President Obama. He also served as a crucial force in strategic conversations with North Korean dictator Kim Jong Un, seeking broad concessions from Kim about his weapons of mass destruction. He participated in key policy formulation on issues related to Russia, including on strategic arms control, and on China.

As the U.S. Ambassador to the United Nations, Bolton strongly defended American economic and security interests, as he did throughout his time at the State and Justice Departments. During his tenure, he was a leading voice on the need for the Security Council to take strong and meaningful action against international proliferation and terrorism.

Along with France’s ambassador, Ambassador Bolton led the Security Council to approve a unanimous resolution to end the summer 2006 Hezbollah war on Israel, to authorize UN peacekeepers and to create an arms embargo against Hezbollah. He also assembled an international coalition that blocked the bid of Hugo Chavez, Venezuela’s Marxist strongman, to join the Security Council.

Throughout his distinguished career, Ambassador Bolton has been a staunch defender of American interests. While Under Secretary of State, he repeatedly advocated tough measures against the nuclear weapons programs of both Iran and North Korea, and the proliferation of weapons of mass destruction worldwide. He led negotiations for America to withdraw from the 1972 Anti-Ballistic Missile Treaty so that the Bush Administration could proceed with a national missile-defense program.

Ambassador Bolton is also an advocate for human rights. While serving at the UN, he arranged the Security Council’s first deliberations on Burma’s human rights abuses. He invited actor George Clooney and Nobel laureate Elie Wiesel to brief the Security Council in September 2006 on the Khartoum regime’s mass murder of non-Arabs in Darfur, Sudan. “Every day we delay only adds to the suffering of the Sudanese people and extends the genocide,” Ambassador Bolton says.

Released in June 2020, his book, The Room Where It Happened is a White House memoir that is the most comprehensive and substantial account of the Trump Administration, and one of the few to date by a top-level official. His op-ed articles have also been featured in The Wall Street Journal, The New York Times, and other periodicals.

A man of principle and conviction, Bolton provided a forward-thinking vision on international economic and political issues vital to the U.S. and its allies. He shares with audiences his views on how the global economy is affected by the international geopolitical environment and foreign government policies, and how business, investors, and government need to respond.

Leaning on his international and diplomatic experience under four presidential administrations, he explores populism, national security, and U.S. oreign policy in uncertain times.