Every year, YES and the PinchukArtCentre present contemporary art.

The artworks are there to provoke thought and discussion beyond the usual conference discourse. Each work carries a message about our world today and tomorrow, and specifically subjects pertain to the heart of political debate.

The world's leading artists offer an imagination for the future. Their works at the 15th YES Annual Meeting - The Next Generation of Everything - support debate on what lays ahead.

We invite all participants to engage with us in a discussion about the future and how these works play upon it.

Whenever the Rainbow Appears, Olafur Eliasson Details from the large painting by Olafur Eliasson called: “Whenever the rainbow appears” is installed as the main visual element for the YES Dining Hall. It is a reminder of the full spectrum of possibilities the future provides. The idea of the rainbow symbolizes hope and triggers our imagination giving capacity to see beyond what is evident and direct. It is a celebration of diversity and creation, a celebration of what is to come: the next generation of everything. 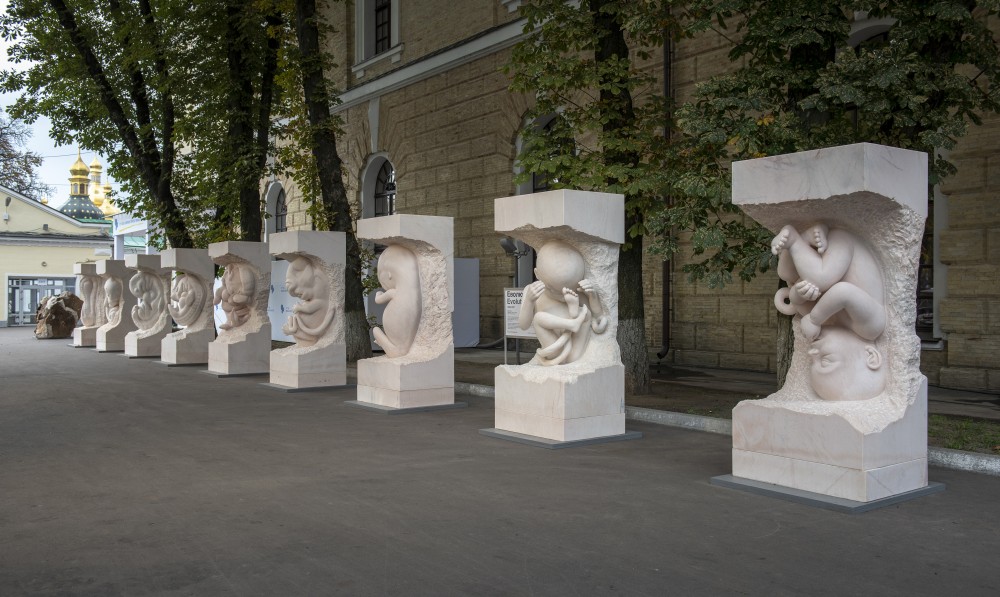 Evolution by Marc Quinn explores an idea of new life and through this new life an idea of new possibilities, hopes, and a future we have not yet imagined. This installation, comprising nine large sculptural components and one rock of unhewn marble, presents the human embryo throughout the stages of its development. Each sculpture represents one month in its gestation. 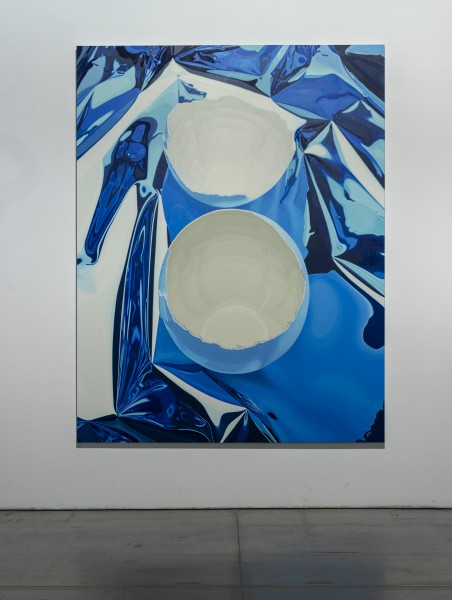 Cracked egg is a meticulous and monumental painting of an open eggshell. The painting suggests the birth of something new. In the context of the forum one can imagine the birth of new ideas, a new life, a new generation. It suggests we know something is coming but at the moment we can only imagine what it will be. Perhaps the next generation of everything. 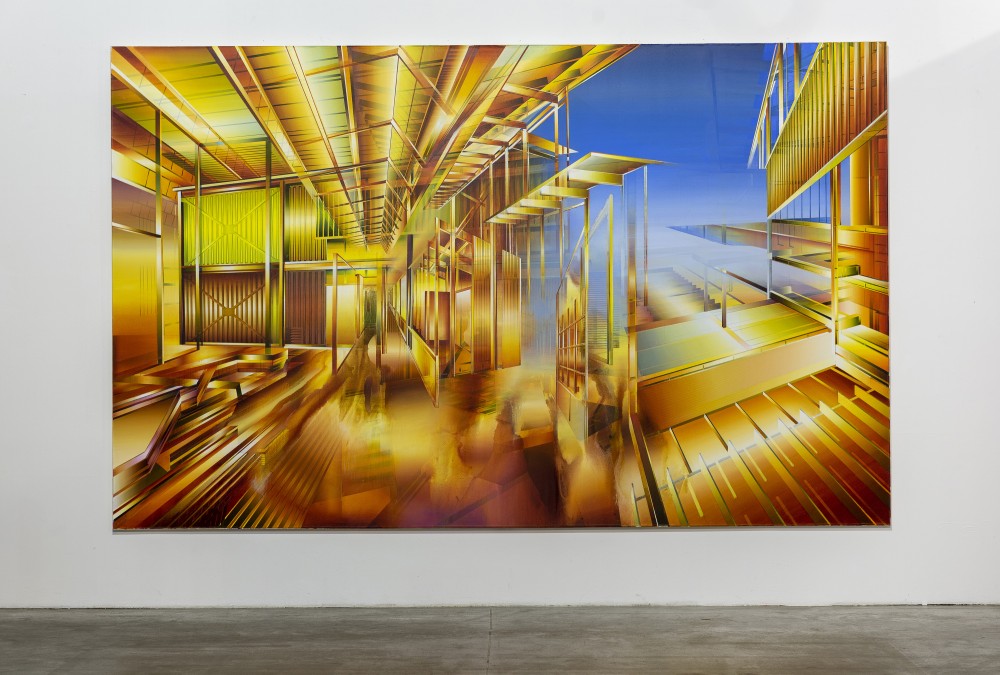 Untitled by Martin Kobe explores how the virtual realm takes over and merges into reality. On the canvas it seems those two worlds collide. Space, architecture, and time transform into one giving a sense of movement and progress. The painting brings our gaze to a near-science fiction world where construction and de-construction are in continuous flux. Where the old is systematically replaced by the new. 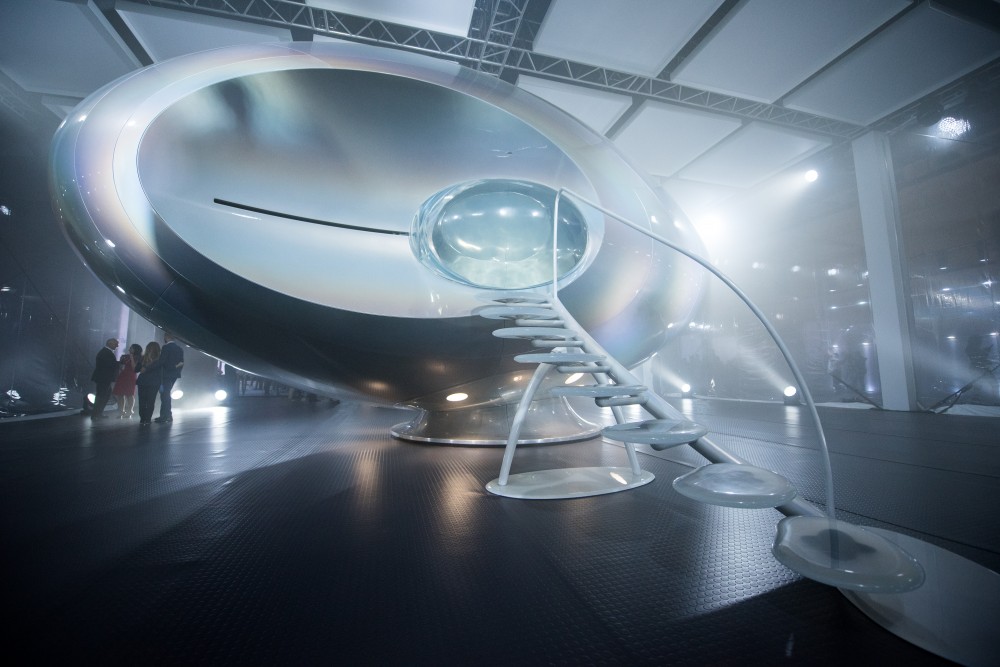 Wave UFO is a symbol for the future. It suggests a world connected beyond its own and people connected with each other. Through the UFO, Mori explores ideas of cosmos through technology and spirituality.

The work is an interactive experience that brings 3 persons together in the UFO. They will see images and hear sounds that are a direct result from their collective brain waves measured during their experience. 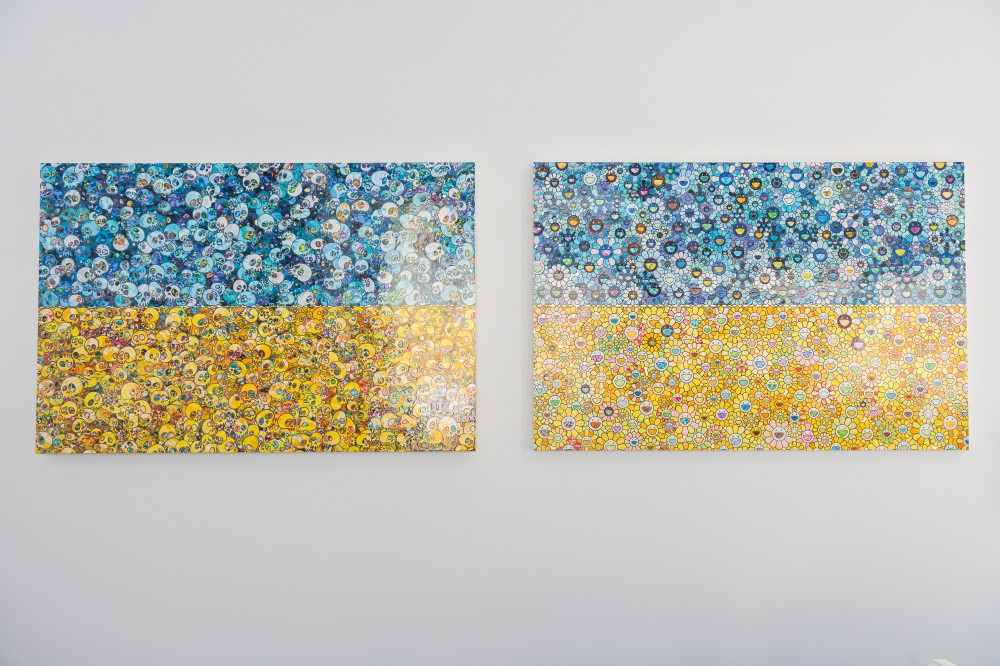 Murakami paints flowers and skulls on the colors of the Ukrainian flag. One canvas, with skulls, depicts the price Ukraine is paying for the ongoing war and its hard fought independence. The other canvas, filled with flowers, shows the hope and a bright future for a country that has all the potential to flourish.

The title: Ukraine: War and Piece is both a reference to Tolstoy's novel and the reality of Ukraine today. 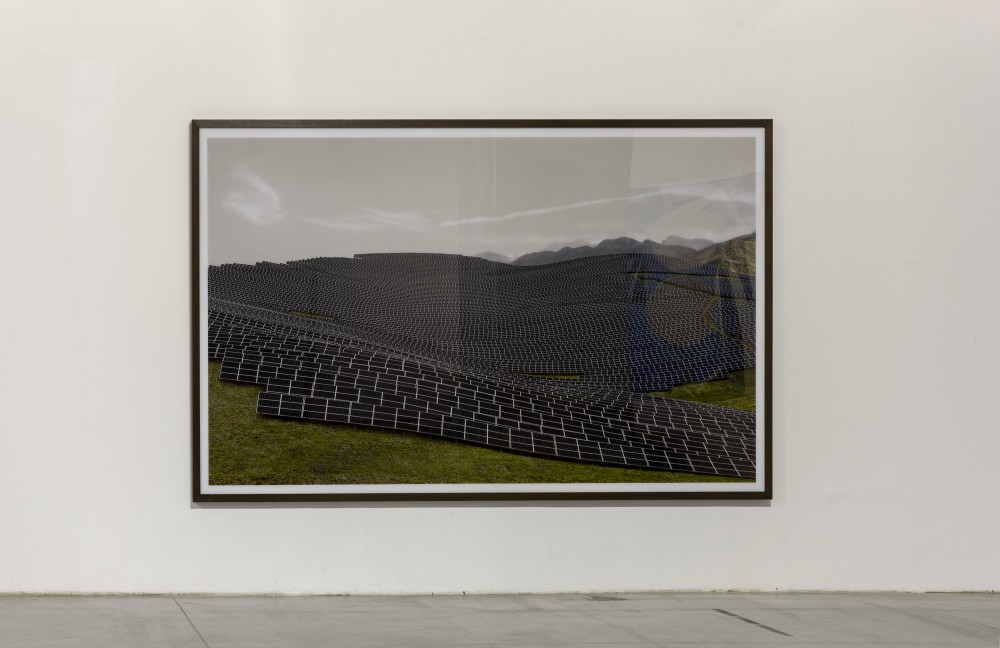 Les Mées is an image of a photovoltaic plant near Marseille in France. In this exceptional location, the panels become part of the landscape. It is an image that allows you to see the old world in the background, the mountains, and the modern world, the plant, up front. Les Mées, like Kamiokande, is looking at the stars, more specifically the sun that feeds the world today and is the source of the future's clean energy, while depicting the impact this potentially has on nature. 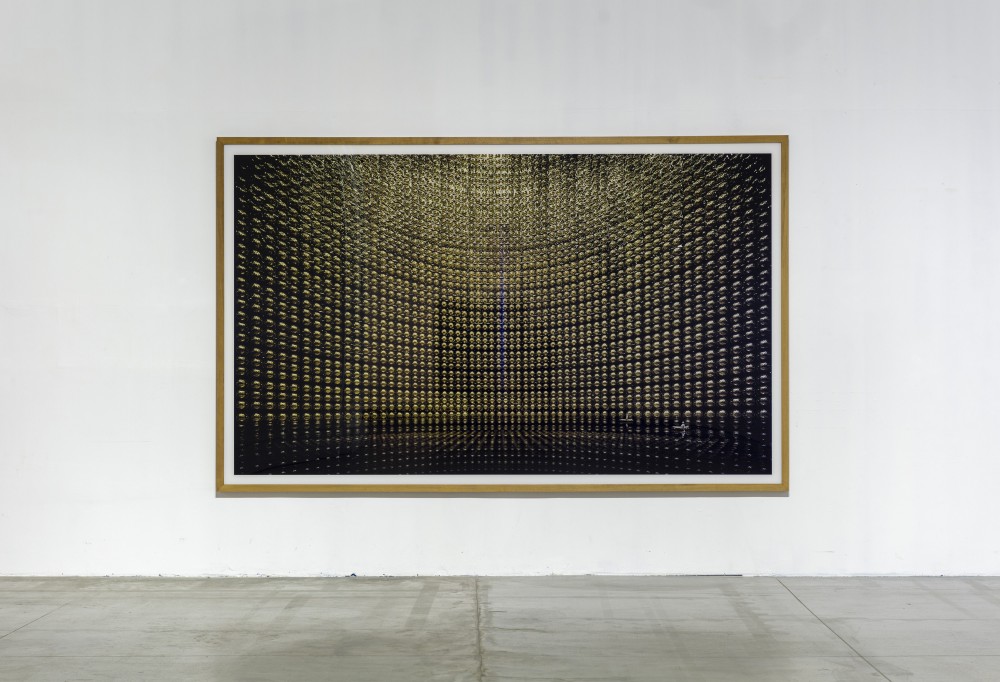 Kamiokande is an image made inside a neutrino observatory that is located 1,000 m under Mount Ikeno in Japan. It was designed to detect high-energy neutrinos to search for proton decay, study solar and atmospheric neutrinos, and keep watch for supernovae in the Milky Way Galaxy.

In the context of the conference, the work refers to our search for new technologies and science. Studying space offers us a different understanding of our world and generates potential new ideas that could revolutionize the world as we know it today. 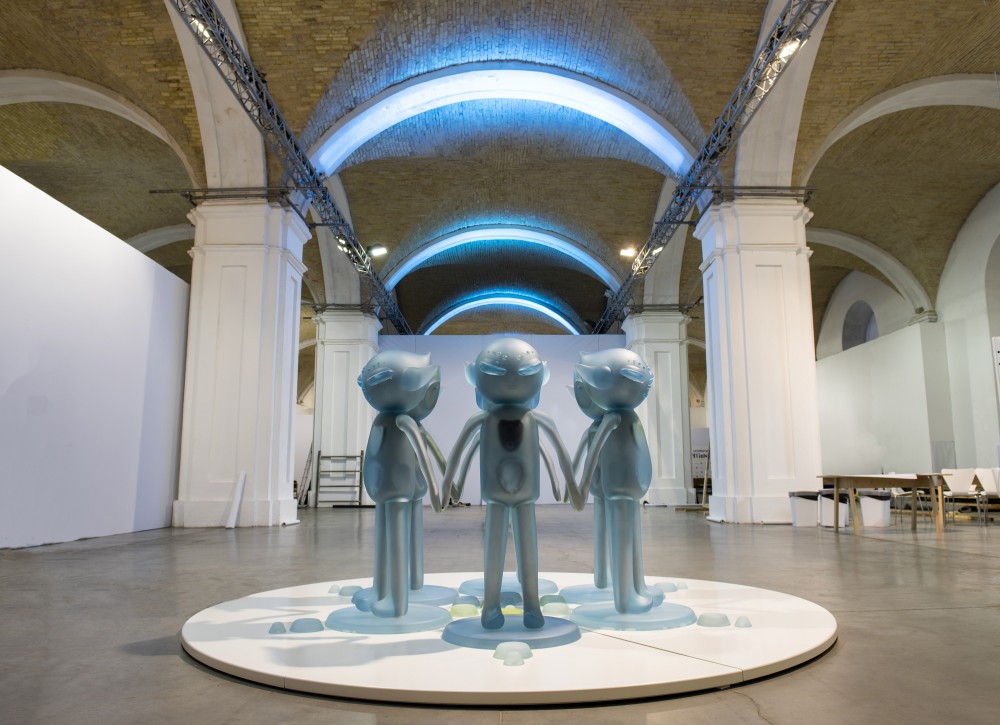 Oneness by Mariko Mori suggests the idea of openness and overcoming the fear before unknown. The work is a metaphor of society’s attitude towards outcasts and calls to reach out and part from prejudice. In the context of the works in this exhibition, it directs our thoughts to space. To where we will explore the unknown and, with a mixture of joy and curiousness, welcome new ideas and realities. Reflexao #2 by Raquel Kogan makes each visitor become a digital figure. Upon entering her immersive work, it seems as if one has entered a digital space and left the real world. The work plays upon how digital reality has gained real-world rights and relevance and how its deep impact has grown into the way we live our life and develop our skills. A human being, outside of the digital real, seems like a hard-to-imagine future. 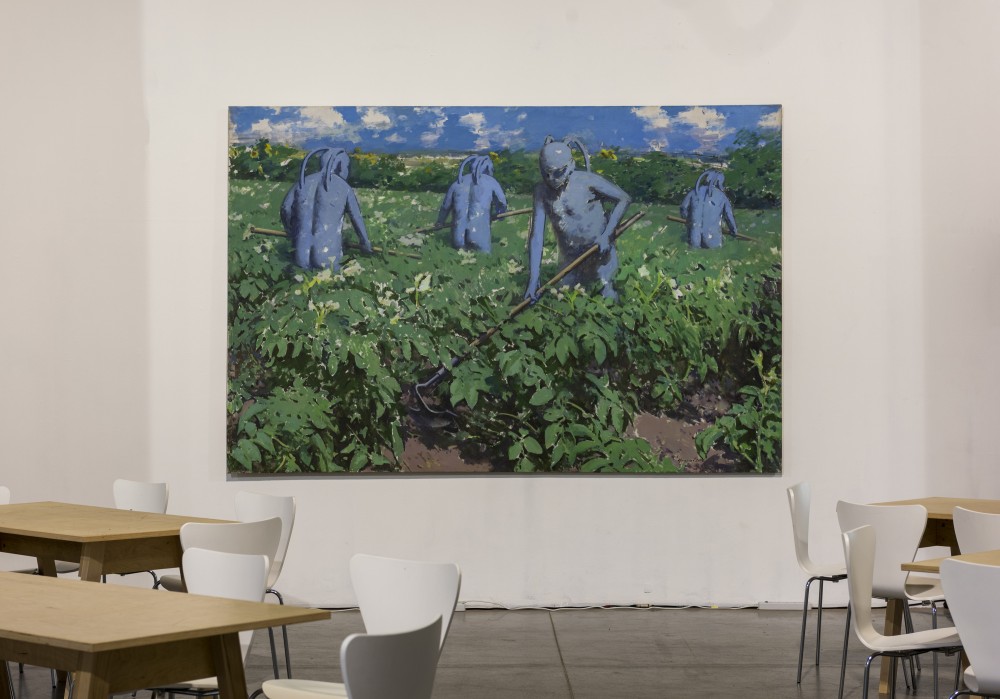 Double landing and Weeding by Tsagolov are two paintings that introduce the world beings to the landing of Aliens. With a strong sense of humor and irony, rural life gets interrupted and partially taken over by the extraterrestrial lifeforms. Tsagolov depicts the entire scene with a wonderful nativity offering us a sense of balance where the existence of aliens becomes a natural part of our existence.

The PinchukArtCentre was founded in September 2006 by businessman and philanthropist Victor Pinchuk. It is one the largest and most dynamic private contemporary art centres in Central and Eastern Europe. With over 3 million visitors, the PinchukArtCentre has become an international hub for contemporary art, developing the Ukrainian art scene while generating critical public discourse for society as a whole.

For more than a decade, the PinchukArtCentre has provided free access to new ideas, perceptions and emotions. Its exhibition program investigates national identity in the context of international challenges. It engages the public in a dynamic dialogue through a full range of educational and discursive events.

In 2016, the PinchukArtCentre launched Research Platform as a pioneering project that aims to generate a living archive of Ukrainian art from the early 1980s through the present. The research is constantly shared with the public through exhibitions, publications, and discussions.

The PinchukArtCentre is located in Kyiv’s historic architectural complex in the Besarabka area, which underwent a major renovation in the beginning of the 21st century. The interior architecture for the centre was developed by the French architect Philippe Chiambaretta. Currently, the PinchukArtCentre occupies six floors with exhibition spaces on four floors, library, education room, book store, video-lounge and café. The total exhibition space amounts to more than 3000 sq. meters.