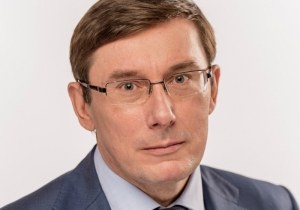 Yuriy Lutsenko is Ukrainian politician and the incumbent Prosecutor General of Ukraine. He formerly served as Minister of Internal Affairs for two terms. The Ministry of Internal Affairs is the Ukrainian police authority, and Yuriy Lutsenko became its first civilian minister in 2005-2006, returning to this position in 2007-2010. Mr. Lutsenko is a former leader of the Petro Poroshenko Bloc party, former leader of its faction in the Parliament of Ukraine, and a member of the Committee on Legislative Support of Law Enforcement in the Verkhovna Rada. On December 13th, 2010, Mr. Lutsenko was charged with abuse of powers and forgery by Prosecutor General of Ukraine Viktor Pshonka and on February 27th, 2012, he was sentenced to four years in jail for embezzlement and abuse of powers. Mr. Lutsenko was held at the Lukyanivska Prison from December 26th, 2010, until April 7th, 2013 when he was released from prison because the Ukrainian President Viktor Yanukovych pardoned him, among others, for health reasons. Both Mr. Lutsenko and his political allies regard his trial as an act of political persecution by the regime of Viktor Yanukovych. In 2006, Mr. Lutsenko established the civic movement “Narodna Samooborona” and successfully led it within electoral bloc “Nasha Ukraina - Narodna Samooborona” to the Parliament of Ukraine. Prior to this, he served as Member of Parliament of Ukraine of IV convocation with the Socialist Party faction in 2002-2005. In 1998 - 1999, Mr. Lutsenko was the Assistant to the Prime Minister of Ukraine. He has also served as the Deputy Minister of Science and Technology in 1997-1998 and the Deputy Head of the Rivne Regional Council in 1994. He was born in 1964 in Rivne and graduated from the Lviv Polytechnic Institute with a degree in Electronic Engineering. Mr. Lutsenko is married and has two sons.

Rule of Law and Fight Against Corruption