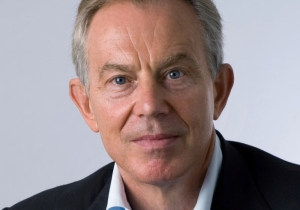 Tony Blair served as Prime Minister of Great Britain and Northern Ireland from 1997 to 2007 - the only Labour leader in the party’s 100-year history to win three consecutive elections. During his time in office, the UK economy enjoyed record growth. His government made major improvements in Britain’s public services, particularly healthcare and education, through a programme of investment and reform. Britain’s first ever statutory minimum wage was introduced. Prime Minister Blair led the successful London 2012 Olympics bid; and oversaw the peace process for Northern Ireland. He introduced the first elected Mayor for London, the Scottish Parliament, Welsh Assembly and Northern Ireland Assembly. He was a staunch advocate of an interventionist foreign policy, in particular in Kosovo, Sierra Leone, Afghanistan and Iraq. He trebled the UK’s aid programme for Africa and introduced the first environmental programme in the UK to combat climate change. Since leaving office Tony Blair has spent most of his time working on three areas: supporting governments to deliver effectively for their people, working for peace in the Middle East, and countering extremism. He has established the Tony Blair Institute for Global Change to work on some of the most difficult challenges in the world today, including how the centre ground of politics renews itself with practical policy solutions.