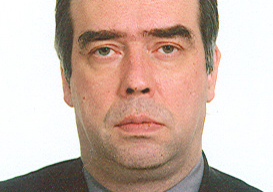 Oleksandr Martynenko was born on August 22, 1960. He graduated from Kharkiv Gorky State University, Economics Department. From 1982 worked as an economist for the planning department of the Komunar [Communard] factory, and from 1987 was a junior scientific associate at Kharkiv State University. From 1990 worked as a reporter and editor of the Kharkiv-based Oriyentyr. Deputat i Profspilky [Landmark. The Deputy and Trade Unions] social and political newspaper. From 1991 worked as the director of a youth center, a chief editor of radio programs, and the head of the news services of the Kharkiv-Novyny regional information and cultural center. From 1992 to 1998, and from 2003 to the present worked as the director general of the Interfax-Ukraine News Agency. From 1998 to 2002, was a deputy head of the Administration of the President of Ukraine, and was the press secretary of the president. In 2002 and 2003 he was a member of the National TV and Radio Broadcasting Council.