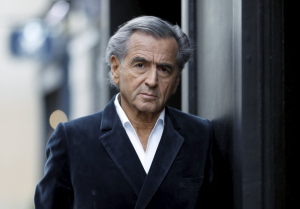 Bernard-Henri Lévy is a French philosopher, writer, activist, and filmmaker. Often referred to in France simply as BHL, he was one of the leaders of the "Nouveaux Philosophes" (New Philosophers) movement in 1976. He is the author of over thirty books, including The Genius of Judaism; Left in Dark Times: A Stand Against the New Barbarism; American Vertigo; Barbarism with a Human Face; War, Evil and the end of History; Who Killed Daniel Pearl?; and The Empire and the Five Kings. His writing has appeared extensively in publications throughout Europe and the United States. His documentaries include Peshmerga, The Battle of Mosul, The Oath of Tobruk, and Bosna. Most of them have been selected for the Cannes Film Festival. Lévy writes a weekly column for the French magazine Le Point, which is translated into various languages and published in various European and American newspapers. He is the co-founder of the antiracism group SOS Racisme and has served on diplomatic missions for the French government. In February of 2014, he was in Kiev during the Maïdan Revolution, actively promoting the events. In February of 2015, he performed his play Hotel Europa at the opera house in Kiev on the first anniversary of Euromaidan's toppling of the pro-Russian government of Victor Yanukovich. As of 2016, he is on the black list of western personalities forbidden by President Putin administration to enter Russia. In Europe, he was one of the leaders of the campaign to release the Ukrainian filmmaker and human rights activist Oleg Sentsov.