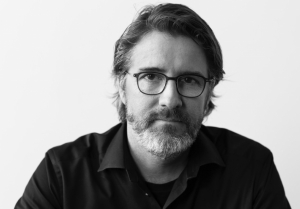 Olafur Eliasson (b.1967) grew up in Iceland and Denmark. He works in a wide range of media, including installation, painting, sculpture, photography, and film. In 1995, he founded Studio Olafur Eliasson in Berlin, which today comprises more than one hundred team members, including craftsmen, architects, archivists, researchers, administrators, cooks, programmers, art historians, and specialized technicians. Since the mid-1990s, Eliasson has realized numerous major exhibitions and projects around the world. In 2003, The Weather Project, installed in the Turbine Hall of Tate Modern, was seen by more than two million people. Eliasson’s projects in public space include Green River, installed in various cities between 1998 and 2001; The New York City Waterfalls, 2008; Your rainbow panorama, a circular colored-glass walkway atop ARoS Museum, Aarhus, 2011; Cirkelbroen (The circle bridge), Copenhagen, 2015; Fjordenhus, Vejle, 2018; and Ice Watch, for which Eliasson and geologist Minik Rosing transported massive blocks of glacial ice from Greenland to Copenhagen (2014), Paris (2015), and London (2018) to raise awareness of climate change. In 2012, Eliasson founded the social business Little Sun with Frederik Ottesen. This global project provides clean, affordable energy to communities without access to electricity, encourages sustainable development through sales of Little Sun solar-powered lamps and chargers, and raises global awareness of the need for equal access to energy and light. In 2014, he and architect Sebastian Behmann founded Studio Other Spaces, an office for art and architecture.