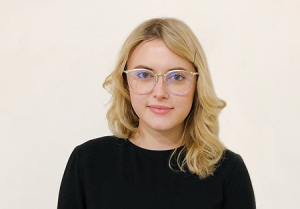 Anna Bogushenko Activist of the global climate movement Fridays For Future. She is studying in her second year of a master's degree in climatology at Odessa State Environmental University. The topic of scientific research is the projection of climate change and the adaptation of large cities of Ukraine to them. From 2016 to 2017 worked on projects for the Sustainable Development Goals at AIESEC. In 2019, she was a participant of a youth exchange “Go Zero Danube” in Germany on the topic of waste reduction in the Danube region. She is a Climate Change Expert of the NGO, О.ЗЕРО, and a member of the organizing team for the first climate strike in Kyiv. She was also a climate strike organizer in Odessa on May 24. Bogushenko participated in the climate summit in Lausanne, Switzerland, as well as in the creation of the “Lausanne Climate Declaration” for the ‘Fridays For Future’ movement.