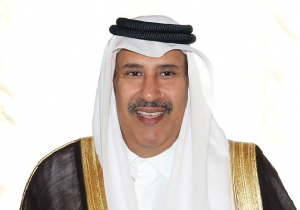 Sheikh Hamad bin Jassim bin Jabor Al-Thani of the State of Qatar has occupied various official posts throughout his life, the last of which as Prime Minister and Minister of Foreign Affairs which he relinquished in June 2013. In his professional activities he chaired numerous international institutions, like the Security Council of the UN, the Arab League Follow-up Committee of the Peace Process in the Middle East, as well as numerous conferences and important meetings held in Doha. Among his many posts in Qatar are important roles in the Supreme Defense Council, the Permanent Qatari Committee for Supporting Al-Quds, the Committee for Drafting the Permanent Constitution, the Ruling Family Council, the Supreme Council for Investing the State' Reserves, the Board of Qatar Airways, the Board of Qatar Investment Authority, the Board of Qatari Al-Diyar Company for Real Estate Investment, the Supreme Council for Economic Affairs, the Supreme Committee for Coordination and Follow Up, the Executive Committee of the Supreme Committee for Coordination and Follow Up, the Supreme Committee on Legislation, the Supreme Committee for Supervising the Implementation of the Future Vision of the State of Qatar, the Committee on Reorganization of Governmental Authorities, and the Assistance Council for Development of the Endowment of the Qatar Foundation for Science and Community Development. He also worked actively in the efforts aiming at settling political conflicts and differences in the region, in Darfur, Yemen, Lebanon, between Eritrea and Yemen, Sudan and Eritrea, Sudan and Chad, Fatah and Hamas, and worked for the release of prisoners in Eritrea, American prisoners in Iran, and Bulgarian nurses in Libya. He is a Member of a number of international institutions, like the Arab Thought Forum, the Club de Monaco, the Advisory Council of the Brookings Institution, USA; and Chairman of the International Advisory Council of the Brookings Doha Centre.

A View from the Middle East