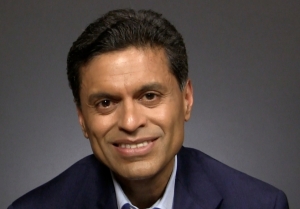 Fareed Zakaria hosts Fareed Zakaria GPS for CNN Worldwide and is a columnist for The Washington Post, a contributing editor for The Atlantic, and a bestselling author. Fareed Zakaria GPS is a weekly international and domestic affairs program that airs on CNN/U.S. and around the world on CNN International. Since its debut in 2008, it has become a prominent television forum for global newsmakers and thought leaders. Interviews on Fareed Zakaria GPS have included U.S. President Barack Obama, Secretary of State Hillary Clinton, Chinese Premier Wen Jiabao, Russian President Vladimir Putin, Israeli Prime Minister Benjamin Netanyahu, and Turkish President Recep Tayyip Erdoğan. Other past guests include military officials such as Gen. David Petraeus and Adm. Michael Mullen; corporate leaders such as Goldman Sachs CEO Lloyd Blankfein and Pepsi CEO Indra Nooyi; and other public figures like Bill Maher and Bono. The program earned the prestigious Peabody Award in 2011 and an Emmy® Award nomination in 2013. Zakaria has regularly hosted primetime specials for CNN Worldwide, such as “Blindsided: How ISIS Shook The World,” “Why Trump Won,” and “Putin: The Most Powerful Man in the World.” He frequently contributes his thoughtful analysis of world events and public affairs to CNN.com; Fareed’s Global Briefing, a daily digital newsletter; and other programming across CNN’s multiple platforms. Zakaria is the author of three highly-regarded and New York Times bestselling books: In Defense of a Liberal Education (2015), a commentary on the importance of a well-rounded education; the international bestselling The Post-American World (1st ed. 2008, 2nd ed. 2011), a discussion of the rise of non-Western powers; and The Future of Freedom (2003), a study of “illiberal democracy” in various countries, also an international bestseller. Prior to his tenure at CNN Worldwide, Zakaria was editor of Newsweek International, managing editor of Foreign Affairs, a columnist for Time, an analyst for ABC News, and the host of Foreign Exchange with Fareed Zakaria on PBS. In 2017, Zakaria was awarded the Arthur Ross Media Award by the American Academy of Diplomacy. Previously, he was named a “Top 100 Global Thinker” by Foreign Policy magazine, and Esquire magazine once called him “the most influential foreign policy adviser of his generation.” Zakaria serves on the boards of the Council of Foreign Relations and New America. He earned a bachelor’s degree from Yale University, a doctorate in political science from Harvard University, and has received numerous honorary degrees.

Will Blockchain Change the World?

Next Generation of Business: Can Impact Investment Overcome Poverty?