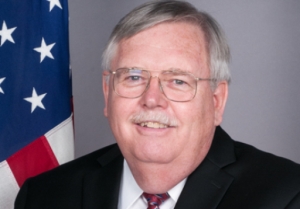 Ambassador John F. Tefft is a Senior Fellow at the RAND Corporation. He served as the United States Ambassador to Russia (2014-2017), Ukraine (2009-2013), Georgia (2005-2009), and Lithuania (2000-2003). He also served earlier in Moscow as Deputy Chief of Mission (1996-1999), as well as in Rome (1986-1989), Budapest (1979-1982), and Jerusalem (1972-1974). Now Ambassador Tefft has retired since 2017 after a 45-year career as a United States Foreign Service Officer. He was the International Affairs Advisor of the U.S. National War College and the Deputy Assistant Secretary of State for European and Eurasian Affairs responsible for Eastern Europe. Ambassador Tefft originally retired from the Foreign Service in 2013 and worked as the Executive Director of the RAND Corporation's US-Russian Business Leaders' Forum until he was recalled to duty to serve as the U.S. Ambassador to Russia in 2014. He is the recipient of the Secretary of State's Distinguished Service Award, and the State Department's Distinguished Honor Award. He is married to Mariella Cellitti Tefft since 1971 and has two daughters and two granddaughters.