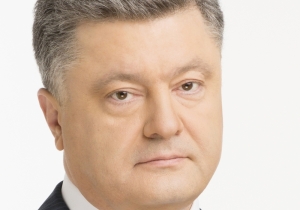 Petro Poroshenko is the President of Ukraine, elected at the early presidential elections on May 25, 2014. As President, he took the oath to the people of Ukraine on June 7, 2014. Petro Poroshenko was born in the city of Bolhrad, Odesa region, on September 26, 1965. From 1982 to 1989, he studied at Taras Shevchenko National University at the Faculty of International Relations and International Law form which he graduated with a Diploma in International Economic Relations. From 1984 to 1986, Mr. Poroshenko did military service. From 1989 to 1992, he worked as a postgraduate student assistant of the Department of International Economic Relations at Taras Shevchenko National University of Kyiv. From 1993 to 1998, Petro Poroshenko served as CEO of corporation group "Ukrprominvest". In 1998, he embarked on a government services career, was first elected as a Member of the Parliament of Ukraine. In 2000, he became Deputy Head of the National Bank Council of Ukraine, and later he was Head of the Committee on Budget Issues of the Parliament. In 2002, he upheld a thesis work "Legal Regulation of Managing State Corporate Rights in Ukraine" and earned a Degree of Candidate of Juridical Sciences. In 2005, Petro Poroshenko served as Secretary of the National Security and Defense Council of Ukraine, and then again he was elected as Member of the Parliament of Ukraine and, from 2006 to 2007, leaded Committee on Finance and Banking Activity of the Parliament of Ukraine. In 2009, he was appointed Minister of Foreign Affairs of Ukraine and in 2012 - Minister of Economic Development and Trade of Ukraine. The same year, he served as Member of the Parliament and Co-Head of the Committee on Parliamentary Cooperation between Ukraine and the EU. In 2007-2012, Mr. Poroshenko was the Head of the National Bank Council of Ukraine. Petro Poroshenko is honored economist of Ukraine, laureate of the State Prize of Ukraine in the sphere of science and technology, laureate of P. Orlyk international prize, holder of the Grand Cross Order of Civil Merit of the Kingdom of Spain. In 1998, Mr. Poroshenko established a signature Charity Fund which carries out charity projects in various spheres of social life. He is married to Maryna Poroshenko. They have 4 children: sons - Oleksiy (1985) and Mykhailo (2001), daughters - Yevheniya and Oleksandra (2000).