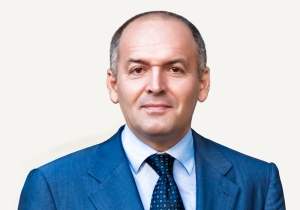 Victor Pinchuk is a Ukrainian businessman and philanthropist. He graduated with honours from the Dnipropetrovsk Metallurgical Institute in 1983 and earned a PhD degree in 1987 before starting his career as a research engineer in pipe production. In 1990, he founded the Interpipe Company on the basis of his patented innovations in pipe design, engineering and production, which were successfully adopted by leading metallurgical factories in the former USSR. In 2007, he founded EastOne Ltd., an international investment advisory company whose portfolio comprises more than 20 businesses and large-scale projects, including Interpipe and assets in Ukraine and internationally in ferroalloys, oil and gas, media and others. Mr. Pinchuk served as an elected Member of the Parliament of Ukraine from 1998 to 2006. For many years Mr. Pinchuk has been developing and supporting a number of philanthropic projects in Ukraine. In 2006, he consolidated these activities under the Victor Pinchuk Foundation, which became the largest private Ukrainian philanthropic foundation. Its mission is "Empowering future generations to become the change makers of tomorrow." It focuses on education, Ukraine's international integration, healthcare and access to the inspiration of contemporary art.The projects of the foundation include the following: the largest private scholarship program in Ukraine, Zavtra.UA; an international scholarship program for Ukrainian students, WorldWideStudies; public lectures with international leaders for Ukrainian students; founding the Kyiv School of Economics; a network of modern neonatal centers throughout Ukraine, Cradles of Hope; the Davos Ukrainian Lunch organized annually at the occasion of the World Economic Forum's Annual Meeting in Davos; and the largest and most dynamic contemporary art centre in Central and Eastern Europe, the PinchukArtCentre. The PinchukArtCentre provides free admission and has welcomed over 3 million visitors since its founding. It also awards the biannual Future Generation Art Prize for artists from any country aged 35 or younger and the biannual PinchukArtCentre Prize for young Ukrainian artists. Mr. Pinchuk has long promoted closer ties between Ukraine and the EU. In 2004, he created the Yalta European Strategy (YES) – an international independent organization aimed at promoting Ukraine’s integration with Europe and the world. Mr. Pinchuk is a member of the World Economic Forum, a member of the International Advisory Council of the Atlantic Council, and a member of the International Advisory Council of Brookings Institution. He was included in the “2010 Time 100 - The World's Most Influential People” list by Time Magazine. In 2013, he joined the Giving Pledge, a philanthropic initiative founded in 2010 by Bill Gates and Warren Buffett.