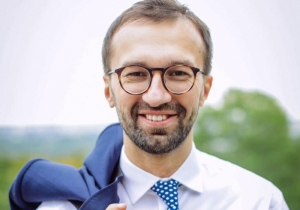 Member of Parliament of Ukraine

Sergii Leshchenko is a Kyiv-based journalist, blogger, and press freedom activist. He was elected to Ukrainian Parliament in 2014, where he currently serves on the Committee on Corruption Prevention and Counteraction. Prior, from 2000 to 2014, he worked for Ukrainska Pravda, where he reported on anti-corruption investigations and other political issues. He assisted with the launch of the "Stop Censorship!" movement in 2010 and "Chesno" campaign that called for transparency in the Parliament. Throughout his career, Mr. Leshchenko received numerous recognitions and awards. In 2011, Poland’s Foundation of Reporters recognized Mr. Leshchenko as the best journalist within the countries of the Eastern Partnership and in 2013 he was awarded a Press Prize by the Norwegian Fritt Ord Foundation and the German ZEIT Foundation. He is also a recipient of John Smith Fellowship and a Draper-Hills Fellowship from Stanford University. Mr. Leshchenko was a Reagan-Fascell Fellow in Washington-based National Endowment for Democracy in 2013-2014, was selected as one of the Reporters Without Borders "100 Information Heroes-2014," and received the NDI’s Democracy Award in 2014. He is the author of The American Saga of Pavlo Lazarenko and Mezhygirya Syndrom of Viktor Yanukovych.