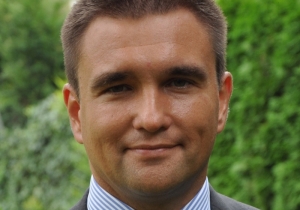 Minister of Foreign Affairs of Ukraine

Pavlo Klimkin is the Minister of Foreign Affairs of Ukraine since June 2014. Previously, he served as both Deputy Foreign Minister and Head of Staff of the Ukrainian Foreign Ministry until June 2012, when he was appointed Ambassador of Ukraine to Germany (2012-2014). Between 2008 and 2010, Mr. Klimkin headed the EU Department at the Ministry of Foreign Affairs of Ukraine. In April 2010, he was appointed Deputy Foreign Minister and played a central role in negotiating the Association Agreement between Ukraine and the EU. His other diplomatic career positions include postings to the Embassy of Ukraine in Berlin (1997-2000) and the Embassy of Ukraine in London (2004-2008). Mr. Klimkin started his career in 1993 as a diplomat at the Ministry of Foreign Affairs of Ukraine. Early on he served in the Directorate-General for Arms Control and Disarmament, later on worked in the departments involved with German diplomacy, nuclear and energy security, economics, and cooperation with the EU. Mr. Klimkin earned a Master`s degree in Physics and Mathematics from Moscow Institute of Physics and Technology before joining the Paton Welding Institute of the National Academy of Science of Ukraine as a research officer in 1991.