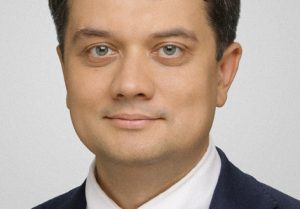 Dmytro Razumkov is political strategist and political analyst. Since August 2019, in his role as a Member of Parliament and Chairman of the ‘Servant of the People’ Party, he has been the Speaker of the Verkhovna Rada of Ukraine. During the 2019 presidential election campaign, he was a political adviser to Volodymyr Zelensky, candidate for the Presidency of Ukraine. After that, he became the Chairman of the Servant of the People Party. He has been working in the field of political consulting and electoral processes since 2006. He participated in the local and central election campaigns. He has held senior positions in the commercial, government, public sectors and political parties. He is specialized in information and analytical work in the field of domestic and foreign policy of the state, as well as the adaptation and implementation of political technologies for the implementation of the formation of public opinion and image strategies. He has worked in the political and electoral spheres. Dmytro Razumkov led regional and local political campaigns in Ukraine for more than 10 years, was a consultant to candidates for deputies of the Verkhovna Rada, an authorized representative of a candidate for President of Ukraine in the national district and the head of the election fund.