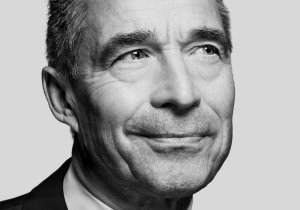 Founder & Chairman, Rasmussen Global Mr. Rasmussen has been at the centre of European and global politics for three decades as Secretary General of NATO, Prime Minister of Denmark, Danish Minister of Economic Affairs, and a leading Danish parliamentarian. In 1998, Mr. Rasmussen became chairman of the Danish Liberal Party and leader of the Danish opposition. In the parliamentary elections 2001, his party won a landslide victory and became the biggest party in the Danish parliament. He formed his first government, and became Prime Minister of a coalition consisting of the Liberal Party and the Conservative People’s Party. His government was re-elected in 2005 and 2007 respectively, and he held the position as Prime Minister until he was elected as future NATO Secretary General at the Strasbourg-Kehl Summit in April 2009. Anders Fogh Rasmussen took office as the North Atlantic Treaty Organization’s 12th Secretary General on 1 August 2009 and held that position until 30 September 2014. His tenure marked a fundamental transformation of the Alliance. Mr. Rasmussen oversaw the Alliance’s operational peak with six operations on three continents including Afghanistan, Kosovo and Libya, as well as counter-piracy along the Somali coast, a training mission in Iraq and a counter-terrorism operation in the Mediterranean. He developed a new Strategic Concept, which sets the Alliance’s core priorities for the future. In the midst of the most serious economic crisis in recent time, he launched “Smart Defence” to help nations make more efficient use of their resources through more multinational cooperation. And in response to Russia’s aggression against Ukraine, he initiated a “Readiness Action Plan” adopted by Heads of State at a historic summit in Wales to strengthen the collective defence to an unprecedented level since the end of the Cold War. A reformer who made the Alliance leaner and more efficient, Mr. Rasmussen also extended and strengthened NATO’s partnerships with nations around the world, making it the hub of a network of international security partnerships. Upon leaving NATO, Mr. Rasmussen founded “Rasmussen Global”, which provides geopolitical and strategic consulting services and advises clients on a wide range of issues such as international security, transatlantic relations, the European Union, and emerging markets. In June 2016, Mr. Rasmussen was appointed adviser to the President of Ukraine, Mr. Petro Poroshenko. Born in 1953, Mr. Rasmussen earned an M.Sc. in Economics from the University of Aarhus in 1978.