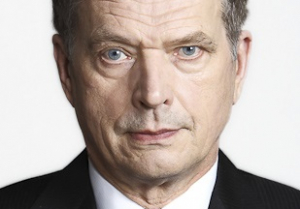 Sauli Niinistö is the 12th President of the Republic of Finland. He was inaugurated on 1 March 2012 and was re-elected for another six-year term in January 2018. It was a historic victory as it was the first time ever for a Finnish presidential candidate to secure more than 50% of the popular vote in the first round. Sauli Niinistö was born in Salo on 24 August 1948. He graduated from the University of Turku with a Bachelor of Laws degree in 1974 and was subsequently employed as a rural police chief and, for more than ten years, as an assistant judge at the Turku Court of Appeal. He also practiced law as an attorney and gained experience of corporate administration. He began his political career in 1977 when he was elected to the Town Council of Salo. He continued to hold elected posts in local government until the 1990s. Niinistö was first elected to Parliament in 1987. His elected posts while in Parliament included chairing the Constitutional Law Committee. In 1995, he was appointed Minister of Justice and Deputy Prime Minister. Reshuffled to the Ministry of Finance in 1996, he eventually became Finland’s longest-serving Minister of Finance to date. From 1994 to 2001, Sauli Niinistö was Chairman of the National Coalition Party. In addition to his political activities in Finland, he was the Chairman of the European Democrat Union (EDU), with a membership of center-right parties from almost all European countries, from 1998 to 2002. He was instrumental in merging the EDU with the European People’s Party (EPP) and was appointed the second Honorary President of the latter. In 2003, Sauli Niinistö took up the post of Vice President of the European Investment Bank in Luxembourg. In 2007 he returned to the Finnish Parliament with the highest number of votes ever gained by a candidate. He was Speaker of Parliament from 2007 to 2011.