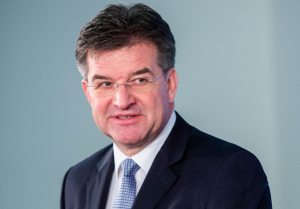 H.E. Lajčák is currently serving his fourth term as the Minister of Foreign and European Affairs of the Slovak Republic. Since the 1st of January 2019, he is also representing the Organization for Security and Cooperation in Europe. Mr. Lajčák has dedicated his professional life to diplomatic service, representing both the Slovak Republic and the international community. He joined the foreign service in 1988 and has held various diplomatic positions since, including Slovak Ambassador to Japan, the Federal Republic of Yugoslavia, Albania, and Executive Assistant to the UN Secretary-General’s Special Envoy for the Balkans. A key figure in the mediation of the post-conflict crises in the Western Balkans, Mr. Lajčák negotiated, organised and supervised the 2006 referendum on the independence of Montenegro on behalf of the European Union. From 2007 to 2009, Mr. Lajčák served as High Representative of the International Community and European Union Special Representative in Bosnia and Herzegovina. He subsequently served his first term as the Foreign Minister, from 2009 to 2010. Between 2010 and 2012, he helped shape the newly formed diplomatic service of the European Union, the European External Action Service, as its Managing Director for Europe and Central Asia. From April 2012 to March 2016, Mr. Lajčák served as Slovakia’s Foreign Minister and Deputy Prime Minister and was reappointed for his third and fourth term as the Minister of Foreign and European Affairs of the Slovak Republic in 2016 and 2018, respectively. Between September 2017 and September 2018, Miroslav Lajčák served as the President of the 72nd session of the United Nations General Assembly. Mr. Lajčák is a graduate of the Moscow State Institute for International Relations and has a law degree from the Comenius University in Bratislava. He has received several state honours, including the Order of the Yugoslav Star, 1st Class (2005), the Order of Honor of the Republic of Moldova (2014), and the Order of the Montenegrin Great Star (2016).