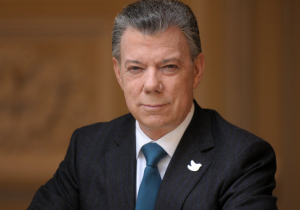 Juan Manuel Santos is the former President of Colombia (2010-2014, 2014-2018) and sole recipient of the 2016 Nobel Peace Prize “for his resolute efforts to bring the country's more than 50-year-long civil war to an end." He began his public service career as Head of Colombia’s Delegation to the International Coffee Organization (ICO) in London. Santos was the last Designee to the Presidency of the Republic (a position that was later folded into the office of Vice President), and the first Foreign Trade Minister, where he led the economic liberalization to modernize and enhance Colombia’s competitiveness in the world market. President Santos also served as Finance and Public Credit Minister, where he successfully handled the worst economic crisis in Colombia. He was also National Defense Minister, where he gave the toughest blows to the FARC (Revolutionary Armed Forces of Colombia—People's Army) guerrilla, which eventually led them to the negotiating table. Santos is known for bringing in a new era of prosperity, peace, equity, and education throughout Colombia; positioning the country among the region's leaders in economic growth, job creation, reduction of poverty and extreme poverty, sustainable development and the enhancement of Information and Communications Technology. Recognized as a leader committed to sustainability, he led the international agenda to develop the Sustainable Development Goals (SDGs) and was appointed by Oxford University as Co-Founder of the Multidimensional Poverty Peer Network. Santos has been featured twice by TIME Magazine among the 100 most influential people in the world and was honored with the World Economic Forum’s Global Statesman Award. Today he is a member of “The Elders” and various boards of trustees in recognized organizations such as the Wildlife Conservation Society and International Crisis Group.