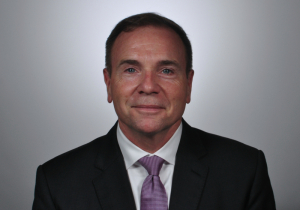 A native of Quincy, Florida, retired Lieutenant General Frederick Benjamin "Ben" Hodges graduated from the United States Military Academy in May of 1980 and was commissioned in the Infantry. After his first assignment as an Infantry Lieutenant in Germany, he commanded Infantry units at the Company, Battalion, and Brigade levels as the 101st Airborne Division and in Operation IRAQI FREEDOM. He also served in an operational assignment as Director of Operations, Regional Command South, in Kandahar, Afghanistan. Lieutenant General Hodges has also served in a variety of Joint and Army Staff positions, including Tactic Instructor at the Infantry School; Chief of Plans, 2nd Infantry Division in Korea; Aide-de-Camp to the Supreme Allied Commander Europe; Army Congressional Liaison Officer; Task Force Senior Observer-Controller at the Joint Readiness Training Center, Fort Polk, LA: Coalition/Joint – 3 (CJ3) of Multi-National Corps-Iraq in Operation IRAQI FREEDOM; Chief of Staff, XVIII Airborne Corps at Fort Bragg; and Director of the Pakistan Afghanistan Coordination Cell on the Joint Staff, Chief of Legislative Liaison for the United States Army, and Commander of the NATO Allied Land Command. His last military assignment was as Commander of the United States Army Europe from 2014 to 2017. Lieutenant General Hodges holds the Pershing Chair in Strategic Studies at the Center for European Policy Analysis (CEPA), where he provides insight into geostrategy, deterrence, territorial defense, and the European military balance. In 2018, he co-led a project and co-authored the subsequent report on “Securing The Suwałki Corridor: Strategy, Statecraft, Deterrence, and Defense,” which provides practical recommendations about the problem set presented to NATO by the Suwałki Corridor, the narrow strip of Polish-Lithuanian territory between the Russian exclave of Kaliningrad and Belarus. He is currently co-leading a follow-up project on securing NATO’s Eastern Flank from the Baltic Sea to the Black Sea. He is also leading a project through CEPA with NATO’s Public Diplomacy Division which aims to promote dialogue about NATO’s significance to the United States among American citizens.