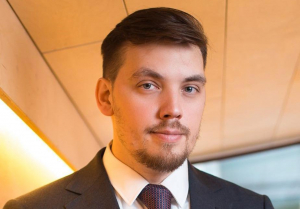 Oleksiy Honcharuk was born in 1984. Honcharuk is Ukraine’s 17th Prime Minister. He is also the youngest PM in modern Ukrainian history. Previously he served as Deputy Head of the Presidential Office of Ukraine and was a member of the National Reforms Council under the President of Ukraine. With more than ten years in legal practice, the Prime Minister has established a reputation as a strong professional and qualified specialist. Honcharuk is also known as a strong fighter for the rights of the business community. Since 2005 he has worked as a lawyer in the PRIOR-Invest investment company, afterwards headed its legal department. In 2008, Honcharuk worked as an arbitration manager, founder and managing partner at Constructive Lawyers, which provides legal services in the field of investment and financing real estate construction. In 2015 he became Head of the NGO, Better Regulation Delivery Office (BRDO). Among achievements as head of BRDO, he cancelled around 1000 of illegal and irrelevant acts, as well as adopting more than 50 businesses decisions. Oleksiy Honcharuk was also External Advisor to Stepan Kubiv, First Deputy Prime Minister, Minister of Economic Development and Trade of Ukraine. He received degrees from the Interregional Academy of Personal Management (Law), and from the National Academy for Public Administration under the President of Ukraine (State Management). He has also studied at Kyiv-Mohyla Business School and the Aspen Institute Kyiv.