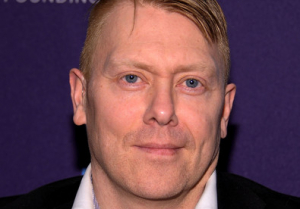 Jón Gnarr (1967-) is an Icelandic actor, writer and comedian and received international attention. When he was Mayor of Reykjavík from 2010-14, Noam Chomsky called him “his favorite mayor.” Mr. Gnarr has also been an active advocate for human rights, both domestically and internationally. He is a member of a number of organizations, including Amnesty International, the Icelandic Ethical Humanist Association and PEN. Jón was made an honorary member of The National Queer Organization of Iceland for his fight on behalf of the rights of LGBT people. In 2009 Jón founded The Best Party, together with a group of other artists. The Best Party won a landslide in the 2010 local elections in 2010 and Jón became Mayor of Reykjavík. Despite enthusiastic support from voters, Jón opted to govern for only a single term; in 2014 he left the mayorship, and The Best Party disbanded. Jón wrote an international bestseller book on his experience in politics “How I Became the Mayor of a Large City and Changed the World” published by Melville House. The book has been translated into many languages. He has won numerous awards during in his career. He has received 12 Eddas (the most prestigious film and television award in Iceland) and he has written and appeared in countless television shows and films. He was named Person of the Year by the Icelandic news channel Station 2 in 2010. In 2014 he received the Humanist Award from the Icelandic Ethical Humanist Association as well as the LennonOno Grant prize for his human rights and peace activism as Mayor of Reykjavík. Jón is a member of the Icelandic Writers’ Union, the Association of Icelandic Actors and Playwrights, and the Icelandic Screenwriters Association. According to polls, a decisive majority of Icelanders named Jón as the person they most wanted to see become the next President of Iceland in the 2016 elections. Jón decided not to run, explaining that he wanted to spend his time with his family and writing.