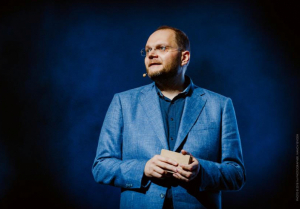 Volodymyr Borodianskyi studied in Kyiv National Economic University (Faculty of Finance and Economics) and got his degree in "Finance and Credit". He has an extensive experience in the media branch: since 2004 he was Director General of STB TV Channel, and from 2012 to December 2018 he headed the largest Ukrainian media group StarLightMedia. "It is crucial to be willing to do something, to be willing to learn, not to be afraid to learn. And if you are a person of this category - you will succeed. Do not be afraid of difficulties," this was the motto with which Volodymyr Borodianskyi managed the company. Over 15 years of his work, he succeeded in making a real revolution at the Ukrainian television. Twice he was honored by the professional award "TV Triumph": the Award’s Special Prize and the Special Prize of the National Council "For a Special Contribution to the Development of the Ukrainian Television." "The decision on who will receive the TV Triumph Special Prize was made unanimously and no one had any doubts. Each member of the Jury wanted to honor this person," the organizers of the competition explained when presenting the award to Volodymyr Borodianskyi.