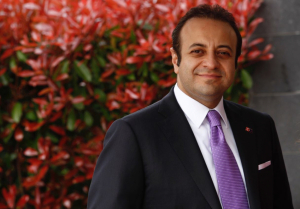 Former EU Minister & Chief Negotiator of Turkey Egemen Bağış was elected a Member of the Turkish Parliament representing Istanbul in 2002, simultaneously serving as Chief Advisor to the AK Party Chairman and Prime Minister Erdoğan, with a focus in international relations. In 2007 and 2011, he was reelected to Parliament for a second and third term respectively. In 2009, Mr. Bağış served in the Council of Ministers as a State Minister and Chief Negotiator, rising to prominence as a key figure in diplomacy. From 2011, he founded and served as the very first Minister of Turkey’s Ministry of European Union Affairs and the Chief Negotiator. Egemen Bağış was responsible for executing Turkey’s full membership negotiations with the EU. When Turkish-European Union relations were at their peak with great momentum, his efforts at the international level not only positively impacted Turkey’s external relations, but also improved its internal relations. The legislative amendments advanced by these efforts made fundamental contributions to the nation’s development as a liberal democracy. As a Turkish lawmaker Mr. Bağış served as President of the Turkey-USA Inter-Parliamentary Friendship Caucus, and President of the Transatlantic Committee for the NATO Parliamentary Assembly. Mr. Bağış was also named “Young Global Leader” by the World Economic Forum in 2010. He made valuable contributions to the cultural development of Istanbul. The Italian government awarded Bağış with the Order of Merit of “Cavaliere” in 2006 and “Commendatore” in 2011. He now serves as Chairman of Occidental Studies Centre & Western Platform at the Istanbul Aydin University where he teaches graduate courses. He is also a founding member of the Board of Trustees at the International Cyprus University. The recipient of many awards, including an honorary doctorate degree from Girne American University, Mr. Bağış has built a successful career as an International Strategic Consultant.