Navigate the meeting
YALTA - President Viktor Yanukovych flies to Moscow on Sept. 24 for pivotal talks with his Moscow counterpart in the hopes of securing cheaper natural gas prices for an ailing domestic economy that is heavily fueled by Russian imports.

The visit comes after the Kremlin continues to pressure Kyiv hard, demanding economic and political concessions that would reel the former Soviet republic back under Moscow's orbit of influence, in return for lower gas prices.

Yanukovych has continued to insist that he will not submit to Russia's main demands - that Ukraine join a Moscow-led customs union or merge its state gas company Naftogaz with Russian energy giant Gazprom. 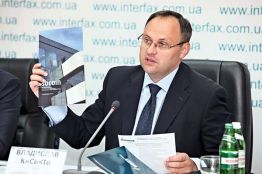 But Ukrainian Prime Minister Mykola Azarov said he hoped for a breakthrough in the talks, in exchange for unspecified "concessions."

Speaking on the sidelines of the Yalta European Strategy conference on Sept. 16, a senior government official told the Kyiv Post that Yanukovych could offer Russia a one-third stake in Ukraine's gas pipelines in return for a new price of $190-$210 per 1,000 cubic meters of gas. Ukraine currently pays around $355.

The drawn-out negotiations have raised questions as to how Ukraine will secure lower gas prices without acceding to at least some of Russia's demands. Analysts said the government should also focus on how to secure long-term energy independence from Russia.

However, the current contract with Russia, signed in 2009 by the then Prime Minister Yulia Tymoshenko, introduced a take-or-pay system, under which Ukraine has to buy set volumes of gas per year. Tymoshenko is currently on trial for signing this contract.

Russia's Gazprom said earlier this month that even if Ukraine wants to import less, it will still have to pay.

Ukraine has demanded a new contract, and the senior government official said it planned to resurrect a deal to give Russia a stake in the country's key gas pipelines in order to secure it. The three-way consortium would also include the EU, which receives around 80 percent of its Russian gas via Ukraine.

The Ukrainian official said he also hoped for a significant increase in the transit fee charged by his nation for pumping Russian gas to European markets. If no agreement can be reached, however, Ukraine has threatened to sue Russia in an international court over the contract, which it considers unfair.

Some analysts say authorities hoped the trial against Tymoshenko for allegedly exceeding her authority as prime minister in agreeing the deal, could be used as leverage to provide a stronger legal basis to fight any case against Russia.

Observers say the government needs a more effective strategy to wean itself off Russian fuel imports to avoid politically charged negotiations over price.

Ex-Energy Minister Ivan Plachkov said Ukraine needs to invest in reforming its energy sector and make it more efficient. "Because of Ukraine's largely outdated and inefficient communal systems and pipes, up to 30 percent of all such precious energy goes up in the air," he said.

Speaking at the Yalta conference, Anders Aslund, an economist at the Washington-based Peterson Institute, told the president that Ukraine has so far failed to redirect its attention to energy efficiency, which is a real issue in Ukraine. He said greater energy efficiency would cut the nation's dependence on Russian gas imports.

He said, however, that the government is reviewing the structure of gas consumption by households and the public utility sector. He said that the nation's individual households use 20 billion cubic meters of gas per year, and this demand is satisfied by domestic production, which roughly equals or exceeds this figure.

Klyuyev said the government is currently inspecting public utilities companies and is discovering that many of them "don't even have gas meters." He said such companies "will only receive licenses if they install meters."

President Yanukovych said his government will continue shielding the population from further price rises until living standings are higher.

"We shall do it, but in some time," Yanukovych said.

Yanukovych has also pushed ahead in the search for other sources of gas. Earlier this month, he paid a two-day visit to Turkmenistan, which until 2006 used to deliver gas to Ukraine.

Ostchem, a chemical holding owned by Dmytro Firtash, a billionaire close to Yanukovych's inner circle and former partner of Gazprom, has been importing less expensive Central Asian gas to fuel his businesses in Ukraine this year. But that option does not exist for the rest of Ukraine.

The obstacle to restarting relations is Russia, as the only pipeline linking Turkmenistan and Ukraine travels over its territory. A planned pipeline under the Caspian Sea could offer a way round.

But even if Ukraine manages to diversify its fuel through such expensive investment projects, Russian is likely to continue in its efforts to preserve a strong grip over Ukraine and the broader region.

"Both Turkmenistan and Azerbaijan are projects of the future. And the reality is that these countries politically and economically depend much on Russia," said Dmytro Marunych, head of Energy Research Institute.