Navigate the meeting
The tiger is gigantic, looming against a glowing golden background.Behind it, cubs frolic.

In discussion, speakers draw on the Murakami picture to illustrate both the irresistible rise of China (big tiger, with the US as cub) and as showing a still dominant US (big tiger, China as cub). 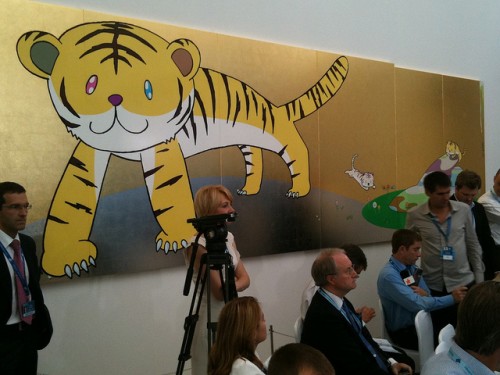 One person not at this year's seminar is former Prime Minister Yuliya Tymoshenko, one of whose campaign symbols in the 2010 presidential elections was also a tiger. Tymoshenko has been in Lukyanivska Prison in Kyiv since her detention after her court appearance on 5 August.

The court cases against her and other members of her government, and the implications of those cases for the development of Ukraine's democracy and future relationship with the EU, are a dominant theme of the conference, both in the plenary chamber and in the corridors and coffee breaks.

This is not surprising, since the outcome of the court cases will have big implications for Ukraine's future development and relations with the EU.

The UK has been a strong partner of Ukraine since 1991. That includes being an advocate of Ukraine's EU membership when the time is right. But to be eligible, Ukraine must meet the Copenhagen Criteria and subscribe to the values set out in Article 2 of the EU Treaty.

If Ukraine does not apply the rule of law objectively and impartially, it will not qualify for EU membership.

At the time of writing, the outcome of the court cases remains unclear. There are many questions about what will happen next, and it is impossible to provide answers to every hypothetical scenario.But the principles set out by the EU for relations with aspirant member states provide a clear framework to guide Ukraine and the EU on the way ahead.

The handling of the cases against Ukrainian opposition figures to date has been judged by experts, including the Danish Helsinki Committee, as violating fundamental principles, in contradiction of common European values.

The democratic standards to which Ukraine must adhere include respect for human rights, the rule of law and an independent, transparent and fair legal process. It follows that any outcome of the current court cases against Mrs Tymoshenko and other opposition leaders must be based on sound legal grounds.

If this is not the case, and if the result is either prison sentences or exclusion of these politicians from political activity, including the 2012 parliamentary elections, this will present obstacles to Ukraine's further European integration – including potential ratification of the Association Agreement and DCFTA.