Larry Summers: Why Ukraine’s debt deal is important not just for Ukraine, but also for the West

Lawrence H. Summers, the Charles W. Eliot university professor at Harvard, is a former treasury secretary and director of the National Economic Council in the White House. He is writing occasional posts, to be featured on Wonkblog, about issues of national and international economics and policymaking. 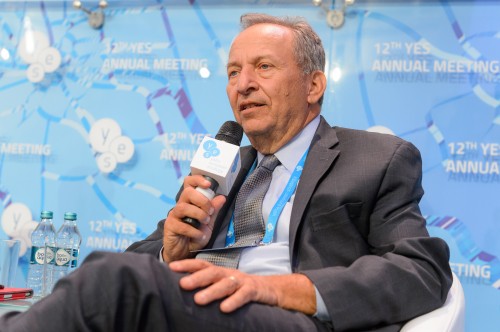 I have spent the last two days in Kiev attending the Yalta European Strategy meeting, where I have had the chance to discuss Ukraine’s economic reform efforts with key officials, including the finance minister and prime minister. I was encouraged to see a country where, despite huge challenges, including Russia’s war of aggression against Ukraine, economic reforms are being carried out and receiving support from the international community.

The Ukrainian parliament will this week vote on a historic debt reduction agreement that finance minister Natalie Jaresko negotiated with Ukraine’s private-sector creditors. The case for approval is overwhelming, both because Ukraine has made a good deal and because disapproving the deal would be catastrophic for Ukraine’s economy. But approval of the debt deal is only one component of the ambitious economic cooperation among Ukraine, Europe and the United States – cooperation that is essential to the geopolitical moment.

I have been watching debt negotiations closely for more than 30 years, since the Latin American crisis of the 1980s. Ukraine has gotten as good and fast a deal as any I have ever seen.

The deal has many virtues:

- It reduces the principal value of Ukraine’s debt and eliminates principal payments for the next four years.
- It unlocks substantial support from the International Monetary Fund and other international financial institutions on a large-scale.
- It brings forward the day when Ukraine can attract significant private capital flows.
- It establishes clear principles that will enable Ukraine to defer all principal payments on its obligation coming due to Russia.

Even if Ukraine’s economy does very well, the “value recovery instrument” issued as part of the debt deal, which aligns debt repayment with economic growth, is shrewdly designed so that the vast majority of future growth will still flow to the Ukrainian people, not to its creditors. This is because: (i) the instrument only kicks in at scale in a decade; (ii) it is subject to repurchase on the open market and to subsequent renegotiation; and (iii) it is carefully designed to ensure that only the initial benefit and not the continuing benefit of Ukraine’s growth flows to creditors.

In the unlikely event that Ukraine’s parliament disapproved the deal, all these benefits would be lost. International financial support would dry up as Ukraine would be seen as unable to carry through on commitments. Confidence in the stability of Ukraine’s currency and banking system would be put at risk. And its leverage vis-a-vis its debt to Russia would vanish.

So I hope and expect that the Ukrainian parliament will ratify the debt deal in the very near future. To paraphrase Churchill, this may not be the end, or even the beginning of the end of Ukrainian economic reform, but it may be the end of the beginning.

Make no mistake – the United States and Europe have an immense stake in Ukraine’s economic success. Our leaders rightly assert that military force is often not the right solution to international conflict. Enabling Ukraine to provide greater improvements in living standards for its citizens than Russia does would be a major triumph for the West. In this regard what we do for Ukraine is likely more important than what we do to Russia.

Support for Ukraine should not be seen as foreign assistance to a striving economic reformer, though it is that. Rather, with Ukraine invaded, support should be seen as investment in forward defense of core U.S. and European security interests. If Ukraine succeeds economically, investments will pay for themselves several times over as loans are paid back with interest, and as Russia’s government is both deterred by Ukraine’s stronger economy and pressured by its economic example.

Historians will wonder why the international community has invested more than 10 times as much money in supporting a recalcitrant Greece as in supporting a reforming Ukraine, since the start of their crisis. Perhaps intra-European Union loans are in some special category, but as of this moment the IMF’s potential exposure to Greece is $41 billion compared to only $22 billion for Ukraine.

Now is the moment for Ukraine at long last to embrace the market and the rule of law. It has the best, most market-oriented economic team in its history. And it is the time for global community to do whatever it takes—much more than is being done today—to provide support at a critical juncture.

Jose Manuel Barroso
President of the European Commission, Prime Minister of Portugal (2002-2004), 9th YES Annual Meeting, 2012
«The intensity of our cooperation will be determined by the intensity of Ukraine’s commitment to our values and to reforms»