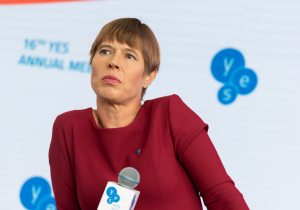 The ‘Rule of Law’ is a substantial prerequisite for a happy way of life for individuals and society at large, says President of Estonia, Kersti Kaljulaid. She expressed this opinion in a speech at the 16th Yalta European Strategy (YES) Annual Meeting, “Happiness Now. New Approaches for a World in Crisis”, organised by the Victor Pinchuk Foundation.

“To me, the rule of law is a powerful reason to feel happy. Because, what does the rule of law give us? Predictability! If everybody respects laws, then nobody – neither the government, nor anybody else – can come and take away from me what I have fairly earned, including my personal stance, my image and my reputation. If I am a law-abiding citizen, the rule of law guarantees me a peaceful life, because I know that I am protected”, she said.

In turn, Juhan Parts, former Prime Minister of Estonia (2003-2005), said that the rule of law implies five conditions, “The first is that somebody has to make commitments to establish the rule of law. These commitments are shared by the political, cultural and economic elites. Obviously, it is not enough that the political establishment merely declares the rule of law: the agenda has to be genuine, and it must be implemented not as an emotion, but as durable efforts. Secondly, the algorithm a new government adopts after a revolution or following the collapse of a former empire is an essential condition. Is it about redistribution of wealth or its creation? I think that the countries that opt for the former algorithm will most probably fail”, he said.

Continuing, Juhan Parts said that equally important prerequisites to guarantee the rule of law are the establishment of effective judicial and law enforcement systems, high standards of transparency, and constant attention on the part of a society and its international partners.

“We all fear a punishment, but we are all humans who happen to break the rules sometimes. Therefore, there is a need for law enforcement and judicial bodies. Maybe it is even the most important (…) Next is transparency. There must be radical conditions and ultimate transparency: everything should be done in the most public way possible. This public transparency will ensure the rule of law better than any bureaucratic regulation. And last is external pressure. Here, one can take the example of relations between the European Union and Ukraine, and the neighbourhood countries (…) Zero tolerance: if there is no improvement, there is no money – that should be the policy”, he summarised.