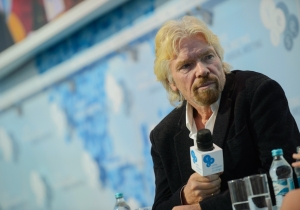 The world community is intent on doing their best to ensure success of the diplomatic initiative on settlement of the Ukrainian-Russian conflict, stated Sir Richard Branson, the founder of Virgin Group, at the session “How business can facilitate peace making for Ukraine” at 11th Annual Meeting of “Yalta European Strategy” (YES) on Friday in Kyiv.

“Continuation of the war will do nothing good…I believe we need to do our best so that the diplomatic initiative be a success. Russia has vast capacity and if the diplomacy fails, we will see the next towns and cities falling and this is not in the interests of Ukraine”, - said Richard Branson.

According to the businessman, the current situation could have been avoided if the West had cooperated with RF more closely and perceived Russia’s President Vladimir Putin more positively: “President Putin feels to be disliked. Even when he was reelected, he did not receive warm attitudes from the West. Perhaps, the West in fact has made a mistake with regard to Russia. If Putin felt the West liked him more this wouldn’t have happened. If we had put better efforts in engaging Russia to cooperation, if we had encouraged Russians more, perhaps everything would have been quite the other way”.

The businessman and philanthropist would like to talk to Mr. Putin about the Ukrainian crisis, and he calls the Ukrainians to support their President Petro Poroshenko’s steps. Moreover, Richard Branson stated that the Crimean peninsula annexed to Russia would not return to Ukraine for a certain time. “The Crimea does not seem to become a part of Ukraine again”, - believes the founder of Virgin Group.