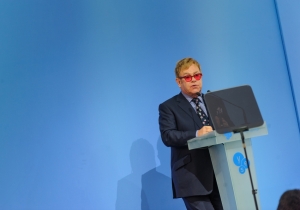 It is an honor to be here at the Yalta European Strategy meeting.

I’m indeed humbled to be included in the group of distinguished business and government leaders, diplomats and humanitarians who have addressed this important annual gathering. And especially so in speaking about building a more tolerant country, the subject of this session.

I want to give special thanks to my friend Victor Pinchuk for inviting me and encouraging me to come and speak my truth.

Since this conference is all about dialogue, I'm hoping you will permit me to start one; one which may be uncomfortable for some, but one which we have to have.

We have to have it because there is a revolution of acceptance and understanding happening around the globe. And for any country wanting to build a more tolerant society, you have to be a part of it.

Of course, the dialogue I’m suggesting is about human rights for lesbian, gay, bisexual, transgender, and other gender nonconforming citizens.  I want to also talk about the important role the business community can play in creating a new paradigm of inclusion -- one that benefits individuals personally and society at large, and one that is also uniquely good for business.  We are tackling one serious challenge together already. I have been so proud and honored to be part of the compassionate… thoughtful… and scientifically based response by the people of the Ukraine to the HIV/AIDS epidemic.

Now, today, I ask you to join me in yet another opportunity.

It may be hard for you to understand that I too felt such fear. Even someone like me – a prominent and protected citizen – is not immune from fear and prejudice. I was able to overcome that fear with the help of family friends, and because of my privileged position. Many others are not. These are the people that need our help.

I tell you with great sadness that right here in this very city, earlier this summer, a simple and modest gay pride parade had to be organized at a secret location to try to prevent hooligans from disrupting it and committing acts of violence against the celebrants. The 250 people marching had to be surrounded by twice as many police in riot gear in order to protect them while they exercised their simple, basic human right to gather in public to celebrate their identity. And still they came under attack. Both physically and with shouts of "death to the faggots." The March lasted all of 10 minutes. The fighting lasted over an hour.  This all happened not in some faraway place nor in some faraway time. This happened right in this very city just weeks ago. So I tell you soberly– we have a long way to go...

There are moments in a person’s life which change everything: they are critical to one’s entire future and legacy: having children, choosing sides in a war or conflict, telling the truth.

For me, that moment was about owning up to the world about my sexual orientation.  At a time when almost all gay public figures were in the closet, to publicly admit I am gay  changed the way the world saw and still sees me, and changed how I felt about myself.  A lot of people no doubt despised me for that fact.  But what I discovered was that many, many more admired my honesty and integrity.

Ultimately, that decision is what emboldened me to find a partner and openly give him the love and respect that he deserved – and to receive it in return.  It gave me the grounding to feel that I could be a good parent and that I knew and accepted myself enough to help guide a new soul to that sense of self-knowing.

It also profoundly changed the way I viewed the world – altering my perspective in a very positive way.  It gave me the courage to quit my addictions and to establish the Elton John AIDS Foundation, which I’m deeply proud to say has helped save the lives of millions of people in dozens of countries over the past 23 years. And which has partnered with some of you to help address the HIV/AIDS crisis here in Ukraine.

What has any of this to do with a conference about the future of politics, security and the economy of the Ukraine? Because critical moments also exist in the lives of societies and nations. The choice of freedom over repression; democracy over totalitarianism; acceptance over hatred.

Today there are more critical choices.

What is Ukraine’s appetite for dissent? How will it define its partners and friends in the years to come? What will be its ethical and moral compass?  As you have already been discussing, the resolution of these issues will affect Europe and the world.

I suggest to you that your stance on human rights will also be a defining characteristic of the new Ukraine, and that there is no clearer touchstone on the issue of human rights than the respect and dignity afforded your LGBT citizens.

I know this issue has been historically contentious.

So let’s set aside, for a moment, the argument, as Hillary Clinton declared in her historic UN speech in Geneva, that “gay rights are human rights.”  Let’s be practical here.  You are, after all, businessmen!

Inclusive, diverse societies are better for business and better for economic growth. Don’t take my word for it.  This comes from your community.  In 2013, 300 of the world’s most successful businesses signed a brief to the U.S. Supreme Court protesting against the Defense of Marriage Act. They explained their plea for LGBT inclusion thus:

“Our principles are not platitudes. Our mission statements are not simply plaques in the lobby. Statements of principle are our agenda for success: born of experience, tested in laboratory, factory, and office, attuned to competition. Our principles reflect, in the truest sense, our business judgment.”

That business judgement is sound.  Laws which protect human rights are good for business. They promote diversity. They expand the talent pool. They allow employers to hire and retain the best and the brightest. They ensure a workplace where employees feel comfortable and feel valued. People are more productive. Diverse, open workplaces encourage creativity, innovation and new idea. Recently studies by the USAID and others confirm this.  They show that emerging economies that protect more rights for LGBT people through decriminalization of homosexuality, nondiscrimination laws, and recognition of LGBT families have higher GDP per capita, even after controlling for other influences on a country’s economic output.  Each additional right is associated with a 3% increase in GDP per capita for those countries.

And we know that laws and policies designed to repress LGBT citizens and to keep people in the shadows hinder economic development. Such policies are detrimental to business and economic interests. They jeopardize the safety and well being of employees and workers. Today some 78 countries make being gay a crime. It's hard to imagine that something so personal and so key to one’s very essence and identity could be criminalized. I and others like me could be arrested.  Indeed we would be arrested in many of those places just for being who we are at our core. In some places we could be tortured or put to death for it. Such intolerance harkens back to some of the darkest times in history. It is beyond inhumane. Such policies are a disgrace.  Many of you in the policy and business arenas are already taking steps to ensure and promote LGBT anti-discrimination measures, including Leshenko, Zalishuk and Naem.  To those of you doing so, I offer my thanks. I applaud you. To those of you who could do more, I beg of you, please protect the human rights and basic dignity of the people who show up to work for you. They deserve it.

So, being tolerant and inclusive is not only the morally right thing to do, for the new Ukraine it is the smart thing to do. Basic fairness is an investment in human capital, and human capital is what drives business.

You can choose to make this part of Ukraine’s future and change its legacy for generations to come. This is not a fantasy, recent events have shown it is a very real possibility.

When I was born, homosexuality had only newly been legalised in the UK. Last year, I married my partner and shared my joy with the world through social media.

And just a few months ago, the United States legalised gay marriage in every state of the Union. Rainbow flags lit up the White House. It’s true. Now even the Pope asks, “Who am I to judge? Who am I to judge?”

On my first visit to Kiev, on a beautiful summer night, I played a free concert on Maidan (“Mi-Dan”) to promote awareness and tolerance of HIV.  Over 300,000 people – including politicians, priests, the young and old -- listened to the music, and the message, and cheered.  It felt like a mandate to the Elton John AIDS Foundation to support projects across this beautiful country – 40 projects to date - offering life saving help to many thousands of Ukrainian men, women and children – gay, straight, young, old.

That night it felt like everyone there on Maidan was on the right side of history.  It’s the Maidan I long to see in the new Ukraine – proud and beautiful, where everyone is welcome.  I suggest to you that accepting people regardless of age, race, gender, ethnicity, and sexual orientation is today the measure of an open, tolerant, and democratic society.  I ask you to begin this dialogue. I ask you to reach for a level of compassion that you may not think possible. I ask you on behalf of myself but also for all LGBT citizens of Ukraine and the world. This is a moral imperative. Let us not fail each other.

The people in this room are among the most powerful in the Ukraine, and in some cases the most powerful anywhere in the world. You have the power to help bring about this new era.  I'm asking you to use that power wisely, to seize this opportunity, and to guarantee human rights for all. And one day I hope to come back to this blessed nation and to extend my thanks to all of you for not only for beginning the dialogue, but for changing lives and ultimately changing the course of history.