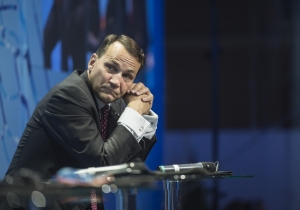 The West should station anti-tank weapons close to Ukraine to help the country in case the Russian troops move deeper into its territory, Radoslaw Sikorski, a member of the Polish parliament and the country's foreign minister in 2007-2014, said at the evening panel discussion at the 12th Yalta European Strategy (YES) Annual Meeting in Kyiv on 10 September.

"Anti-tank weapons can be deployed somewhere close to Ukraine, in Poland or Romania. If the pro-Russian or Russian forces move deeper into the territory of Ukraine, these weapons will be supplied to Ukraine in a very fast manner, within an hour. President Putin should understand this," Sikorski said.

The Polish MP also suggested that time was not working for the Russian leader. "If we manage to persuade him of this, I hope he will make steps towards an agreement which will benefit Ukraine and Russia," he said.

Other panellist, NATO Secretary-General Anders Fogh Rasmussen, who was the prime minister of Denmark in 2001-2009, has said that the plan A foresees a peaceful course of developments in Ukraine. However, if it is clear that "Russia and the separatists do not cease fire, time will come and the Western nations will arm Ukraine".