Elton John is to speak about tolerance and human rights at the 12th YES Annual Meeting September 12 in Kyiv, Ukraine 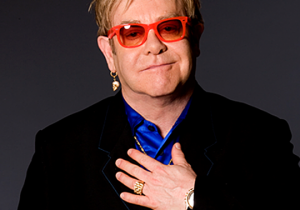 On Sep 12 in Kyiv, Ukraine at the 12th Annual Meeting of the Yalta European Strategy (YES) Sir Elton John, founder of Elton John AIDS Foundation, will speak on tolerance and human rights and the responsibility of business and social leaders, as well as on how to build a more tolerant Ukraine with a free and democratic society.

World famous singer, philanthropist and fighter for human rights, Sir Elton will address the participants of the YES Meeting in Kyiv. To the wider audience Sir Elton will address via live stream at yes-ukraine.org. Elton John talking about basic principles of acceptance, tolerance, respect and dignity that 21st century states should be built on. He will address the critical moments of the history of new Ukraine and comment on the development of LGBT rights in Ukraine. Elton John will also talk about how not only political and social, but also business leaders can contribute to maintain a country’s choice to be part of a democratic, prosperous and tolerant world.

The Elton John AIDS Foundation has been funding programs to fight the HIV/AIDS epidemic in Ukraine since 2001.  To date over £7.5m ($11m) has supported 40 grants to Ukrainian projects reaching millions of people, including a national TV campaign on HIV awareness with David Beckham, and helping to establish the National Network of People Living with HIV/AIDS in Ukraine,  now a beacon of excellence around the world.  Since 2001 Sir Elton John and his Foundation have been carrying out numerous projects in Ukraine in cooperation with the Elena Pinchuk ANTIAIDS Foundation fighting HIV/AIDS crisis, providing support and assistance to HIV-positive people, and helping children who are either living with or orphaned by AIDS.

As a result of 5-year project in Ukraine, 119 HIV-positive orphans found their families, thousands of children were kept in their biological families and teachers went through extensive course on dealing with HIV-positive kids. Three year cooperation with social services in Kyiv resulted in dramatic change in lives of women and girls who live and work at the streets. 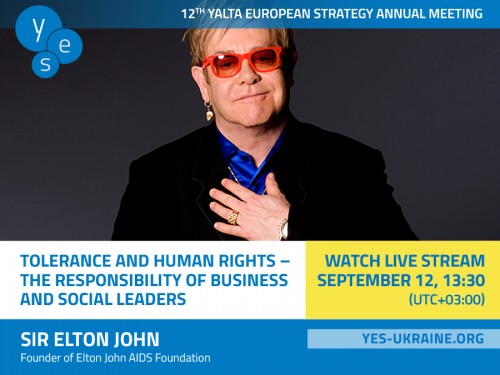 Being a powerful voice of major national campaigns fighting HIV/AIDS and battling ignorance, stigma and prejudice in the society, Sir Elton John performed at the two free grand charity concerts at Maidan (Independence square) in Kyiv addressing millions of Ukrainians via TV broadcast and gathering hundreds of thousands people at the main square of Ukraine in 2007 and in 2012 on the night before a final game of EURO 2012 Football championship.

The 12th YES Forum entitled “At Risk: How New Ukraine’s Fate Affects Europe and the World,” organized by YES, in partnership with the Victor Pinchuk Foundation, will be taking place September 10-12, 2015, in Kyiv, Ukraine. Forum will concentrate on determining how Ukraine can become a force for global stability and European values in today’s volatile global context, building on the revolution of dignity, and addressing the challenges that arose from the annexation of Crimea, the conflict in the East, and the urgent need to reform the country’s financial, economic, legal and security sector.

President of Ukraine Petro Poroshenko will officially open the 12th YES Annual Meeting on September 11th. He will speak about Ukraine’s position in the current global context and present his vision on how to overcome current challenges and threats.

For more than a decade, YES has worked to connect Ukraine to the world, explore ways to a peaceful and cooperative wider Europe. The annual forum convenes global leaders, government officials, business executives, social innovators and Ukrainian student leaders to identify, address and find solutions that may help overcome the obstacles preventing Ukraine from becoming a more modern, open and prosperous country.

This year, the 12th YES Annual Meeting will bring together more than 350 global leaders from politics, business, society and media from more than 20 countries to discuss new Ukraine’s impact on Europe and the world. One hundred Ukrainian student leaders, including those who have received scholarships from the Victor Pinchuk Foundation, will also have a chance to meet YES speakers and participants.

Gideon Rachman, Chief Foreign Affairs Columnist, The Financial Times and Stephen Sackur, Presenter, HARDtalk, BBC will moderate the 12th YES Annual Meeting. Participants will arrive in Kyiv on September 10th for an opening reception and discussion of the question: “What Ukraine expects from Europe – And Vice Versa.” The official venue is the National Cultural-Art and Museum Complex «Mystetskyi Arsenal».