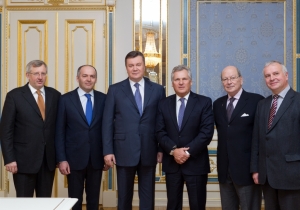 On March 18-19, 2013 the Board of Yalta European Strategy (YES) visited Kyiv to discuss Ukraine's development and relations with its neighbors.

During the visit the board met with President of Ukraine Viktor Yanukovych, Prime Minister Mykola Azarov, Foreign Minister Leonid Kozhara, leader of the "United Opposition" Arseniy Yatseniuk, leader of UDAR party Vitali Klitschko, Head of the Committee of European Integration of the Parliament of Ukraine Grigoriy Nemyria, as well as with Ambassadors of EU countries.

According to Viktor Yanukovych, strengthening of the rule of law and judicial independence remain unchanged priorities for Ukraine. "I am pleased to note that Mr. Kwasniewski is very much involved in this process. Our active collaboration is rich in content. Promotion of Ukraine’ s European integration on the part of Yalta European Strategy is very significant, and we appreciate it," he said. The President has also added that every year, during Yalta European Strategy Annual Meetings, Ukraine step by step gets closer to its goal - integration into the EU.

"YES is a platform to contribute to enabling political dialog," said Aleksander Kwasniewski, President of Poland (1995-2005) and Chairman of the Board of YES. "As an independent non-governmental network with a strong tradition of high level international contacts, we want to contribute our share to open and constructive discussions also about difficult issues."

Mario David, MEP, Vice President of the European Peoples' Party and member of the Board of YES, added: "We believe that current challenges and difficult questions need to be discussed and at the same time we need to develop our vision for a mid- and long term strategy for Wider Europe and the important role of Ukraine in this."

Jared Cohen
Founder and CEO, Jigsaw, 15th YES Annual Meeting, 2018
«In the process of helping Ukraine we’re going to learn about the most recent tactics that are deployed by outside actors to disrupt the democratic process.»