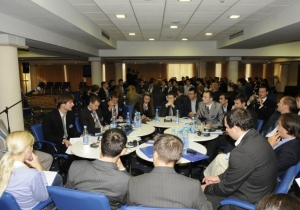 The first working day of the 2nd YES University, one of the largest fora of the young political leaders of Europe taking place in Kyiv until October 4, has closed.

Opening ceremony of the forum was led by Mr. Steven Byers, Member of Parliament, UK, Chairman of the Board of YES; Mr. Mario David, Vice-president of the European People's Party and the YES University founder; and Mr. Victor Pinchuk, founder and Member of the Board of YES.

"We have an exclusive opportunity to gather representatives of three largest political families of Europe - European People's Party, socialists and liberals. It is the evidence that we can unite if the serious things are concerned indeed", Mr. Mario David, Second YES University founder, said in his introductory word.

Mr. Yuriy Pavlenko, the Minister for Family, Youth and Sport of Ukraine, emphasized in his welcome statement that it was vital for Ukrainian youth to integrate in the European youth institutions and to promote cooperation between political and social youth movements of Ukraine and EU.

In addition, the Minister announced greeting address of Mr. Victor Yushchenko, the President of Ukraine, to the forum: "I extend my sincere greetings to the organizers and participants of the forum staying on the hospitable Ukrainian land! Vigorous development of the global processes in the new millennium, emerging prospects and challenges, necessity of the joint search for timely and efficient responses induce us to boost the dialogue between the masters of our future - young political and public figures, representatives of numerous youth organizations. The 2nd University of Yalta European Strategy provides us with this particular opportunity. I am adamant that your forum will manage to initiate and deepen contacts between the future leaders of Ukraine and EU, contribute to ultimate Europe's unification based on common civilization values and world vision, democracy, freedom and human rights. I wish you fruitful deliberations, inspiration and effective outcome of your activities".

The agenda proceeded with three parallel workshops: European Economic Slowdown: Impact and Solutions, Dealing with Growing Commodity Prices (Food and Energy Crisis) and Building European Competitiveness in the Global Economy.
The afternoon session started with the address of Mr. Jan Figel, European Commissioner for Education, Training, Culture and Youth. He stressed on the necessity to learn the lessons of history and build future society based on common humanitarian values. In his view, young Ukrainians should intensify their integration into European education system and avoid relying on anyone to decide upon their European belonging. "Brussels is not a whole Europe, Europe is what we are building together, it is our common home", he said.Subject of the next discussion block was worded as Future of Europe and its Institutional Framework. Referring to the new format of the Lisbon Treaty, Mario David noted that it should ensure more transparent Europe where all states, notwithstanding their weight, should enjoy equal rights. According to Mr. Marek Siwiec, Vice-President of the European Parliament, negative results of the treaty voting are not proof of the people's reluctance to build united Europe but of their distrust to existing political system established in 19th century under quite different historical circumstances. In his opinion, to elaborate the new treaty needs new configuration of "politics-society" relations.

The first working day of the forum was closed with three parallel workshops The end of Nation-States, towards the Balcanization of Europe?, Building European citizenship? and Demography and Immigration Policies.