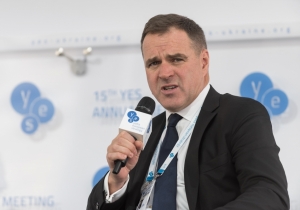 A united Europe may find itself paralyzed and falling into disintegration, says Niall Ferguson, Senior Research Fellow at the Hoover Institution of Stanford University.

“I think historians of the future will say Brexit is just a preface to a greater problem of European disintegration. I have got a feeling that the problems are many times bigger than what Europe can or is willing to imagine. First, they failed to overcome the financial crisis, second, they have got trapped with the Arab revolution, and third, they created the chaos of the migration crisis of 2015-2016 ... I am afraid that the destination point is a paralysis, and perhaps the retreat of the process of European integration”, he said while speaking at the 15th Annual Meeting of the Yalta European Strategy (YES) “The Next Generation of Everything”, organized by the Victor Pinchuk Foundation.

The historian added that China could become a provenance of major upheavals in the nearest future.

“We can see the Chinese economy, and the Chinese technology companies. However, I believe, it will be hot soon, and it is the Chinese crisis that will become a “black swan”. We all came to the conclusion that the Communist Party plus the computerization of China would mean communism. But, in fact, I think China is far from being able to confront the United States. I think the Chinese system is on the verge of very serious troubles,” he said.

Niall Ferguson listed the following triggers that may lead to the crisis in China - demographic crisis, accumulation of excessive debt, and actions of the country's leadership aiming at full control over the Internet and other spheres of life – all in all it kills artistic and scientific freedom.

“Creativity is a key to everything. If the Chinese regime succeeds in turning the Internet into a big surveillance machine, what will happen first is that the freedom of thought and creativity will die. I can already see it, my friends from Chinese universities say that science is being frozen,” said the senior research fellow at the Hoover Institution of Stanford University.