Europe has to restore peace on the continent, and Ukraine’s objectives for the next 10 years should be reforms, – President of the Republic of Estonia Toomas Hendrik Ilves 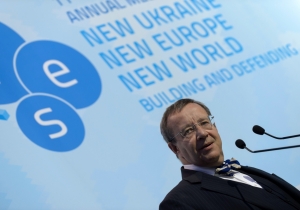 Europe has to restore peace on the continent, where now the war is on in Ukraine because of Ukraine’s pro-European ambitions, and for this country the objectives for the next ten years should be to implement reforms, stated President of the Republic of Estonia Toomas Hendrik Ilves at the opening of 11th YES Annual Meeting entitled “New Ukraine, New Europe, New World: Building and Defending” on Friday in Kyiv.

Being an independent and sovereign state, Ukraine has made its European choice and now it suffers the war, - Estonian President said, - The country’s willingness to join NATO or to join the EU, to ratify the Association Agreement, may not be the cause to invade this country”.

Toomas Hendrik Ilves stated Ukraine faces huge reforms ahead, and Estonia promises to help with their implementation. “There are many countries that have passed and completed this process successfully. Ukraine is to implement similar reforms now”, - said the politician. However, the President of Estonia mentioned the reform process is not possible in the wartimes. “One may strive and try, just like President Poroshenko has been doing now. He has been performing the Hercules’ exploits. I can’t recall any similar cases in the past, but I think President Poroshenko is on the right track”, - said Toomas Hendrik Ilves.

The President of Estonia emphasized that the former European security architecture had disappeared: “What seemed to be established in 1945 is ruined now - I mean the principle of inviolability of borders. We saw something like Anschluss although we supposed this phenomenon had disappeared forever… This is Europe that can stop all these things.”