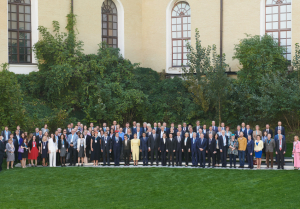 Victor Pinchuk, businessman and philanthropist, founder of YES, opened the first day of the YES Brainstorming in Kyiv, organised by the Yalta European Strategy (YES), in partnership with the Victor Pinchuk Foundation, and expressed the view that Ukraine is not only an integral part of Europe’s history, but also Europe’s future.

10 September 2011 - The first day of the Yalta European Strategy (YES) Brainstorming, themed “Post-Covid = Pre-Disaster? Steps to Survival”, was opened by Victor Pinchuk who called on global leaders to listen to Ukraine in order to prevent future disaster. Around 70 politicians, diplomats, businessmen, activists and experts from more than 20 countries have gathered at the intimate event taking place across September 9-11 in Mystetskiy Arsenal, Kyiv, Ukraine.

Addressing during the first session of the YES Brainstorming the President of Ukraine, Volodymyr Zelenskyy, confirms he has no regrets over taking leadership, despite the global and regional challenges his nation faces. The session was a broad ranging discussion in which the President gave his opinion on the challenges the world faces post-pandemic, Ukraine’s relationship with Russia, the US, Europe and China, and the path of his Presidency.

During the conversation, President Zelenskyy mentioned the idea that the world needs to change in order to manage the existential threats of climate change, COVID-19, future pandemics and potential wars. He also said that the world needs new leaders who show their force and power with their words, and their ability to think holistically and collaborate to solve global challenges, not with weapons or threats of war.

On the subject of climate change, Professor Ferguson said that any changes the US and EU are making to combat climate change will have little effect if they cannot persuade China and India to reduce their GHG emissions. Bregman and Sackur both referred to the fact that, historically, the West has contributed far more than China and India to the deterioration of the climate, and that the West cannot expect China to reduce its emissions if its own house is not in order. While they concluded that there are serious issues that we need to address as a global community, the apocalypse is not yet upon us.

During a brainstorm entitled ‘Does the US Withdrawal from Afghanistan Imply a Loss of Credibility for all US Commitments and Alliances? Or is Afghanistan a Special Case?’ Charles King, Professor of International Affairs and Government at Georgetown University, claimed that the US is clearing the decks in a bid to rebuild itself from the inside out.

According to King, China and Russia have been quietly smiling whilst the US has been spinning its wheels in Afghanistan and Iraq, but claimed that Biden is now focused on rebuilding and reorienting to ensure that American democracy does not stumble and that someone like Donald Trump never occupies the White House again.

The issue of ‘Extreme Weather and Climate Change - Can We Stop It, and What Will It Take?’ was discussed by Fareed Zakaria, host of CNN, Mike Berners-Lee, director of Small World Consulting, Rutger Bregman, and Andrew Forrest AO, chairman and founder of Fortescue Future Industries, Minderoo Foundation, and Tattarang.

According to Zakaria, the most imminent crisis of climate change is clear - population displacement from the planet’s equator will result in political and social turmoil across the globe. A heated debate ensued between the panel on where priorities should lie to curb carbon emissions, but the panel formed a consensus on the gravity of the issue and that any solutions must begin with fundamental changes in human society.

Some highlights from the sessions heard so far include: