YES Brainstorming - the second day: discussing the aftermath of 9/11, the possibility of a new Cold War and challenges and opportunities for Ukraine 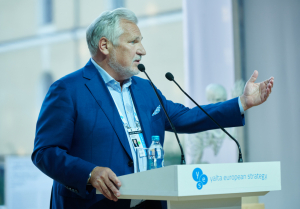 The second day of the YES Brainstorming in Kyiv, organised by the Yalta European Strategy (YES), in partnership with the Victor Pinchuk Foundation, concluded with sessions on the Kremlin’s view on Ukraine and the aftermath of 9/11 and what it means for tomorrow

11 September 2021 - The second day of lively and enlightening debates at the YES Brainstorming event was concluded as high-level European and Ukrainian leaders and experts - including former UK Prime Minister Tony Blair - gathered to discuss Ukraine’s contribution to the global economy, the Kremlin’s view of Ukraine, the aftermath of 9/11 and what it means for tomorrow, and how a new Cold War will not save a warming planet.

Around 70 politicians, diplomats, businessmen, activists and experts from more than 20 countries gathered at the intimate event which took place over September 9-11 in Mystetskiy Arsenal, Kyiv, Ukraine.

The fifth session, chaired by Gillian Tett, US Editor at Large at The Financial Times, and David Rubenstein, co-founder and co-chairman of The Carlyle Group, discussed the global economy and how Ukraine can contribute. The pair were joined by Vladyslav Rashkovan, Alternative Executive Director at the International Monetary Fund, Olena Bilan, Chief Economist at Dragon Capital, and Taras Kachka, Deputy Minister of Economy - Trade Representative of Ukraine, who debated the current state of the Ukrainian economy and what the country should do in order to encourage foreign investment.

The conversation focused on Ukraine’s strong tech and STEM credentials which have been growing, on average, by 30% each year over the last ten years. According to the panelists, the best way for Ukraine to attract foreign capital quickly is to encourage entrepreneurial activity which will lead tech-oriented investors to visit Ukraine.

The next session focused on the topic, ‘The Kremlin’s View of Ukraine - and What to Do About It’, in which Niall Ferguson, Senior Fellow, Hoover Institution, Stanford University acted as moderator. He was joined by Timothy Snyder, Levin Professor of History, Yale University, Serhii Plokhii, Mykhailo S. Hrushevs'kyi Professor of Ukrainian History and Director, Ukrainian Research Institute, Harvard University, Masha Gessen, Author, Journalist, Staff Writer at The New Yorker; Distinguished Writer in Residence, Bard College and Olga Stefanishyna, Deputy Prime Minister for European and Euro-Atlantic Integration of Ukraine. It was a wide-ranging discussion, but the group’s conclusions were that Putin’s view of Ukraine is historically wrong, demonstrates beyond all doubt that Ukraine is not Russia, and that the best way to rebut the narrative of the Kremlin is to tell the fascinating history of Ukraine.

The seventh session focused on ‘9/11 and the Aftermath - What it Means for Tomorrow’, and was especially significant given the timing of the session taking place on the 20th anniversary of the catastrophe. Fareed Zakaria, Host of CNN, led a respectful and reflective discussion with former UK Prime Minister, Tony Blair who shared the anxieties that were felt immediately after the tragic event that changed the world forever. Blair cited the many lessons that have been learned over the last 20 years, but in particular urged world leaders to consider devising a policy for fighting terrorist organisations that is based on strategy, a deep analysis and deliberation with allies, and not as a result of short-term politics.

The final session of the day was a heated debate moderated by Gillian Tett, US Editor at Large and Chair of the Editorial Board, The Financial Times, on “A New Cold War Cannot Save a Warming Planet” in which Fareed Zakaria and Niall Ferguson clashed wits. Zakaria argued in favour of the motion that a new Cold War cannot save a warming planet, contending that we can only save humanity from the greatest existential threat through collaboration with the likes of China, India and Brazil. Conversely, Ferguson argued that it was only through the competition of a Cold War that the planet could be saved, and drew attention to increasingly hostile relations between China and the West, stating that the conditions of a Cold War already exist today.

The packed two days of dialogue and discussion was brought to an end with closing remarks from Aleksander Kwaśniewski, President of Poland (1995-2005) and Chairman of the Board of YES.