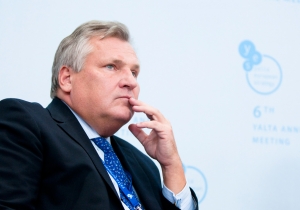 After six years as Chairman of the Board of the Yalta European Strategy network, Rt. Hon. Stephen Byers has decided to stand down from his position.

The Board of YES has elected Aleksander Kwasniewski, former President of Poland (1995-2005), as the new Chairman.

The Board of YES expressed its thanks to Stephen Byers for the work he has accomplished over the last six years as Chairman of the Board of YES, helping YES become a prominent network building closer links between Ukraine and Europe.

The Board is looking forward to further strengthen the role of Yalta European Strategy in EU-Ukrainian relations and Ukraine's global integration under the leadership of President Kwasniewski, an outstanding statesman with extraordinary experience and expertise in international relations, and a great European friend of Ukraine.

"I am very honoured to be the new Chairman of the board of YES", President Kwasniewski said. "As a Member of the Board for three years, I know that tremendous work has been done and much has been achieved since the inception of YES in 2004. As Chairman of the Board, I will do my best to bring the relations between Ukraine and the European Union to a new level and work with Ukraine towards achieving its eventual EU membership."